Rabat - The American University of Leadership hosted on Friday June 3 a panel of speakers, including Minister of Higher Education, Scientific Research and Training Dr. Lahcen Daoudi, to speak about efforts to reform the public education system.

Rabat – The American University of Leadership hosted on Friday June 3 a panel of speakers, including Minister of Higher Education, Scientific Research and Training Dr. Lahcen Daoudi, to speak about efforts to reform the public education system.

During this “Education for a Better Morocco” address, he and his colleagues reinforced their commitments to education and the pursuit of knowledge, citing history and modern shortcomings to underline the importance of this institution. They made ambitious promises to the nation, the results of which have yet to be seen.

The first speaker was President of the American University of Leadership Dr. Anass Lahlou. He began by reflecting over the factors which elevated the great powers of the world to their dominant positions. He attributed the United States’ success to a history of “scientists bringing knowledge from outside the US.” Seeking out knowledge wherever it may be found was his defining factor for America’s century of global ascendency.

Lahlou considers this as Morocco’s path forward. Ten years ago, the king had a vision to “make Morocco a hub” of learning and science. Realizing this dream, according to Lahlou, would elevate the nation’s status on the international stage and improve lives at home.

“Knowledge: that’s how Morocco will evolve,” he stated. He cited 100,000 Moroccan intellectuals abroad, necessitating foreign language-learning and opening the possibility for bringing the cutting edge of global intellectualism back to Morocco. Lahlou concluded by imploring intelligent education reform, saying that the “will is there; what is lacking is the strategy.”

Dr. Lahcen Daoudi, Minister of Education, tied historical glory to education. He acclaimed Fez’s University al Qarawayin, considered the oldest university in the world, as a proud legacy of Morocco. Its founding by Fatima al-Fahri in the 9th Century and the attendance by Pope Sylvester II demonstrates the nation’s historical commitment to diversity, including women, different religions, and foreigners.

Medieval Morocco welcomed Jewish refugees fleeing the persecution of the Spanish Reconquista, becoming a “state within a state,” he said.  This was a rare example of Muslims, Jews, and Christians coexisting, he added.

Daoudi expressed his desire to see Morocco return to this role of global leader in tolerance and diversity.

He also talked about mass migration and extremism, first claiming that extremism is not Islamic, but was imported from abroad. The only means to fight extremism, according to him, is science. According to Daoudi, knowledge and learning beyond contrived and limiting boundaries would elevate the society itself as well as its neighbors.

Because of this commitment to education, “Morocco welcomes sub-Saharan Africans to study at Moroccan universities, which turns the country into “gate towards Africa.”

Daoudi cited over 15,000 African students with 8,000 scholarships attending Moroccan universities, many of whom are not even required to have a visa.

Daoudi said that Morocco intends to use education as a weapon to fight extremism and help stabilize the continent. He mentioned Africa’s 2 billion people to highlight the importance of guiding them towards education instead of radical ideologies. His concerns transcended Moroccan or even European crises, asking “How many migrants will leave Africa if it is not safe? Even America will not be safe.” Daoudi finished poetically, describing Morocco as “The lit candle”, whose light must expand to cover the whole region.

Mariam Dahbi, cabinet member of the Minister of National Education and Vocational Training, concluded the panel by addressing the problems of Moroccan education head-on.

She shattered the illusion that 99% schooling rates perpetuated, citing that of every ten students who enter elementary school, eight will proceed to middle school, six will continue to high school, and only three will graduate high school. Of those three, only half will obtain their Bachelors’ Degree. 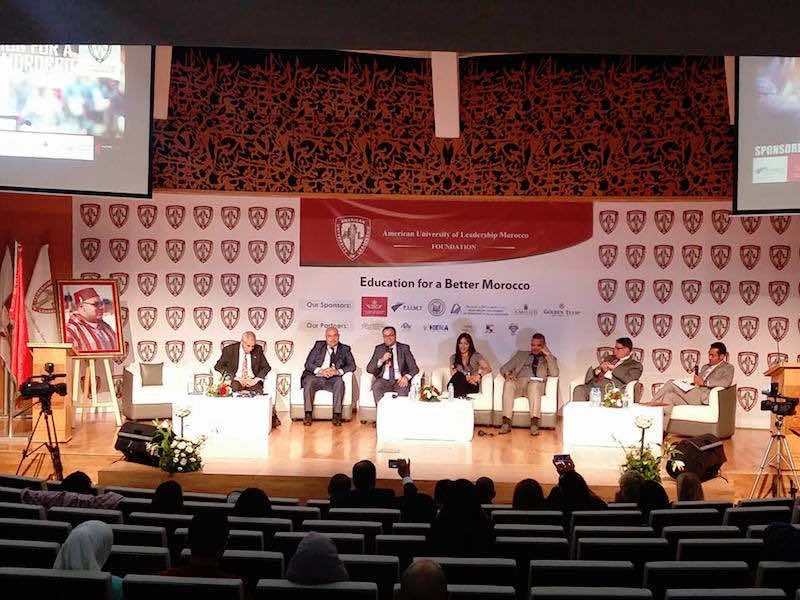 Dahbi pointed to the Strategic Vision 2030, which the king’s Higher Council for Education Reform drafted to address educational shortcomings. This Strategic Vision includes 32 projects for short, medium, and long-term changes. It promises a new model for middle school foreign language instruction, and commits to corresponding literacy with high-level reading skills.

She said that students with special needs would not be forgotten. Schools will remove classrooms with two grade levels and teach marketable vocational skills to include the non-intellectually disposed students, as administrative management will overall be improved. The Baccalaureate Exam shall be available in Arabic, French, or Spanish, she said.

This Reform Act will supposedly stand stronger than past efforts, since it is a “binding contract for coherent implementation of all plans” between the government and the king.

Her speech finished along idealistic lines. She detailed the benefits that various fields have on education beyond teachers alone, asking architects to build schools, businessmen to fund libraries, and engineers to improve facilities.

Dahbi tied this effort to the family unit, stating that “Education is the primary building ground of Morocco,” and it begins with children “made readers on the laps of their parents.”

The panel reaffirmed Morocco’s commitment to education, and elaborated on current problems with the system, as well as ambitious goals to fix them. The speeches were impressive, but often in the abstract, explaining which problems would be fixed rather than step-by-step programs addressing how to fix them.

Any Moroccan who has lived through countless efforts to reform public education could cite similar such lofty promises in the past. It remains to be seen whether the Strategic Vision 2030 can be effectively implemented and affect meaningful change, or if it will be another unsuccessful effort in a long line of unfulfilled promises.