Rabat - One police officer and two civilians were killed and around 30 were wounded in a large car bomb attack that hit on Wednesday the police headquarters of the Midyat district in the southeastern province of Mardin, Turkish Prime Minister Binali Yildirim has said. 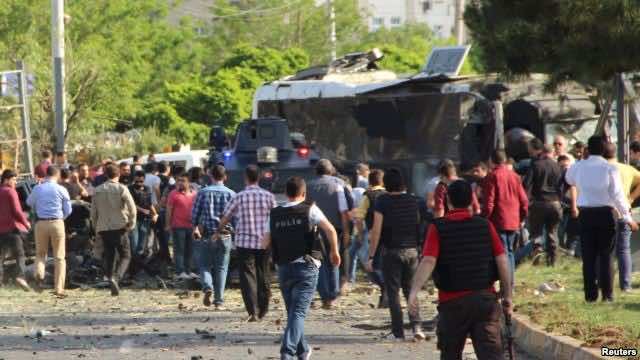 Rabat – One police officer and two civilians were killed and around 30 were wounded in a large car bomb attack that hit on Wednesday the police headquarters of the Midyat district in the southeastern province of Mardin, Turkish Prime Minister Binali Yildirim has said.

The Kurdistan Workers’ Party (PKK) was behind the attack, Yildirim added.

“This has not surprized us. Their circle is slowly tightening. The fight against terrorism is tough and requires determination. There are killers in the guise of humans in front of us and behind us,” he told reporters in Istanbul.

The bomb-laden car, which arrived in Midyat from the southeastern province of Batman carrying 500 kilograms of explosives, sought to enter the headquarters, but was stopped by the police. The car exploded when police opened fire to stop it, according to Turkish medias.

It was the second large-scale car bomb attack in two days in Turkey, as seven police and four civilians were killed in central Istanbul on Tuesday.