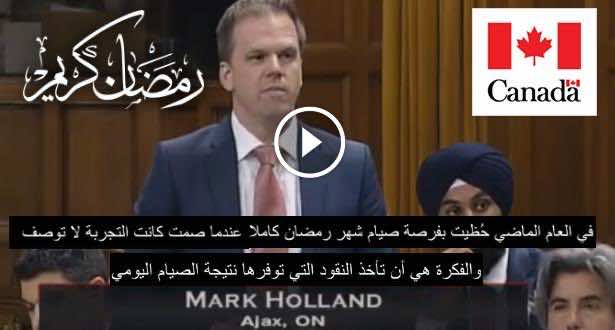 Rabat – Canadian Member of Parliament Mark Holland told the House of Commons on June 3 that he will observe Ramadan this year and donate the money he saves to charity.

Holland is the Liberal Party’s representative in the district of Ajax, Ontario. He served from 2006 to 2011 and was reelected in 2015.

In his address to the House of Commons last week, Holland stated: “Mr. Speaker, next week there will be hundreds of thousands of Canadians who will be celebrating Ramadan… I want to take this opportunity to wish all those who are celebrating Ramadan, Ramadan Mubarak. Last year, I had the opportunity to fast for the entire period of Ramadan. It is something I am going to do again in support of a charity called Give 30. People take the money that they save from fasting every day and give it to those in need, particularly food banks.”

“When I fasted, it was an incredible experience to feel what it was like to be hungry. Of course, I got relief at the end of the day, but for many children, unfortunately, in Canada and around the world, that relief never comes. [Give30] gives an opportunity to reflect upon that and use the power of Ramadan to help others.”

Founded by Ziyaad Mia in 2012, Give30 facilitates direct donations to food banks across Canada during the month of Ramadan. The organization hopes that Muslims and non-Muslims alike will use the month of Ramadan to empathize with those who are plagued by hunger and thirst year-round. Mia’s initiative has raised over $300,000 USD since 2012. In the first four days of Ramadan this year, Give30 raised $17,557 USD.

Holland’s decision to observe Ramadan has received international attention. Queen Noor al Hussein of Jordan tweeted her support of his decision on Friday, and a Facebook video of his speech received over 5 million views and 107 thousand likes.

In addition to his contributions to Give30, Holland’s announcement is a show of solidarity with Canada’s Muslim population of one million as they celebrate the Islamic holy month.