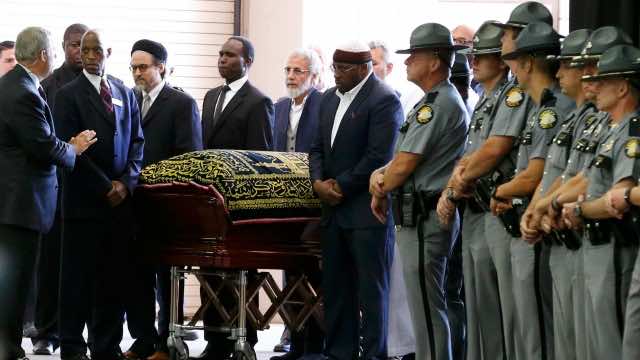 Rabat – Boxing legend, Muhammed Ali, has been laid to rest in his hometown in the state of Kentucky, U.S.A., according to Al Jazeera.

Ali died last week at the age of 74. The funeral procession followed was attended by tens of thousands of fans. At least 100,000 people lined the streets to say their final goodbyes to Ali, according to the Associated Press.

Ali’s private burial ceremony, on Friday at Louisville’s Cave Hill Cemetery, was followed by a memorial. Many world leaders attended the private burial, including former US president Bill Clinton.

As the interfaith service went about, a crowd of up to 15,000 people burst into applause, chanting, “Ali! Ali!” when a Muslim religious leader welcomed the audience to “the home of the people’s champ”.

In his tribute, Clinton said Ali “is truly a free man of faith”.

Lonnie Ali, widow of the legend, said her husband was “proof that adversity can make you stronger”, growing up in a segregated country.

People lined the streets, throwing flowers, and shouting, “Ali! Ali!”, as the hearse carrying his body left the funeral home, while others carried banners and photos of Ali.

Lawrence Montgomery, a former neighbor of Ali, said that he has “mixed emotions”, knowing that Ali, who was suffering from the debilitating Parkinson’s disease for decades, is no longer in pain, according to Al Jazeera.

“He was a marvelous young man. Very cordial and playful,” Montgomery said, recalling that as a child Ali already wanted to be a boxer.

The funeral procession took place on Muhammed Ali Boulevard, and ended with a private burial ceremony before the public memorial service at the KFC Yum! Center, a sports arena in Louisville, Kentucky.

US President Barack Obama was not able to attend the memorial service because of his daughter’s high school graduation, but one of his closest aides, Valerie Jarrett, read a letter on his behalf.

A Muslim prayer service in Louisville was held on Thursday, drawing thousands of mourners, including Turkish President Recep Tayyip Erdogan.

Ali joined the Nation of Islam sect in 1964, changing his name from Cassius Clay to Muhammed Ali. He later left that sect to practice Sunni Islam.