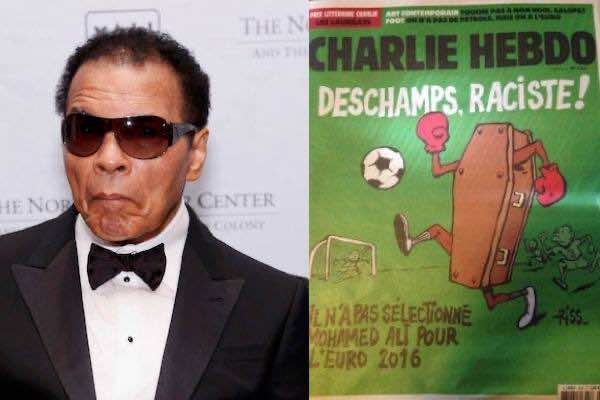 Published earlier this week, the controversial French magazine’s article said sarcastically that French coach Didier Deschamps is “racist because he did not include Muhammad Ali,” in the team scheduled to compete in the European Cup of Nations Euro 2016, which kicked off in Paris last Friday.

The sarcasm referred to an accusation levelled by French player Karim against Deschamps for not including him on the team despite his great performances with his club Real Madrid.

The picture, which has been denounced on social media as “distasteful” and “disrespectful” of the Muslim legend, was posted Wednesday on the magazine’s Facebook page.

This is not the first time Charlie Hebdo has disrespected the dead. Last September it caused worldwide uproar after it published a caricature mocking the death of Syrian child Aylan Kurdi, the toddler who became a symbol of the refugee crisis that summer.

And in January, the French magazine stirred another controversy when it published a new caricature which suggested that the Syrian toddler would have become a sex offender if he had succeeded in reaching European soil.

The caricatures caused a wave of outrage and indignation worldwide and were denounced by many, including Brazilian author Pablo Coelho and Queen Rania of Jordan.