Rabat - Prison Break star Dominic Purcell has criticized the health care infrastructure in the city of Ouarzazate where he was seriously hurt on May 30 in an accident on the set of the latest show in the Fox drama series. 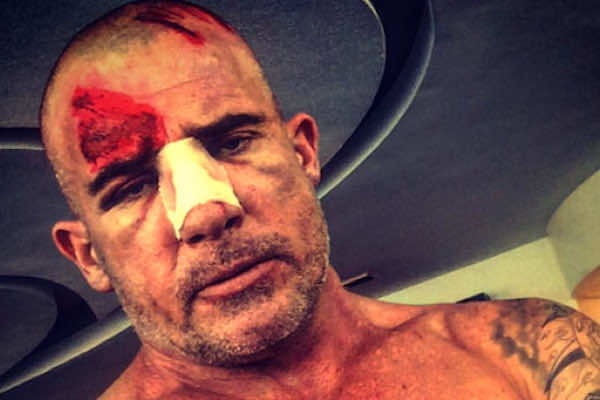 By
Larbi Arbaoui
-
Larbi is a freelance writer and assistant editor at Morocco World News.
Jun 12, 2016
Spread the love

Rabat – Prison Break star Dominic Purcell has criticized the health care infrastructure in the city of Ouarzazate where he was seriously hurt on May 30 in an accident on the set of the latest show in the Fox drama series.

In an interview with Deadline, Purcell said that he had suffered a broken nose and head injury when an iron bar fell on his head while he was shooting a scene in which he had to run inside a prison.

The American star said that after his injury he was taken to a hospital, but that “the first hospital or clinic they went to was closed,” something that took the actor by surprise.  “We’re in Ouarzazate (Morocco) — where American Sniper, and Black Hawk Down, and all these great films were made — which is in the middle of nowhere,” he said.

Purcell opined that “the medical infrastructure isn’t the best.” He said that they had taken him to another hospital that was also in very poor condition, with “cats roaming around the hospital.”

“Again, I was in shock, still, and I walked into this little surgery place, and a whole bunch of doctors were just arguing over who was gonna work on me, and there were blood stains on the sheet,” Purcell said.

“I sat there and looked at everyone, and I just calmly got off this operating table and walked out of the hospital,” he added.

The Prison Break star added that his girlfriend AnnaLynne took control and “poured alcohol on my head, and wrapped me in gauze,” before Fox got a helicopter and flew him out of Ouarzazate to Casablanca.

Upon his arrival in Casablanca clinic, the actor said that “everything just lined up because this doctor—Doctor Bensouda—he is one of the best plastic surgeons there (in Casablanca), and also has clinics around the world.”

“He put me under anesthetic, straightened my nose—re-broke it to straighten it again—and he said I have extra layers of skin around my skull, which actually prevented the blow from being fatal,” Purcell said.

Purcell shared a video on Instagram of him receiving medical care in the hospital in Casablanca after the operation and thanked Prison Break co-star, Wentworth Miller, for his support.

U wanna see some funny shit me on drugs after my operation from my battle wounds. Ha!! Chill people I’m totally fine. Just having a laugh at my own expense. NO MORE GET WELL SOON. IM GOOD!!!!!!!!! WHY SO SERIOUS!! Haha. Laugh!!!!