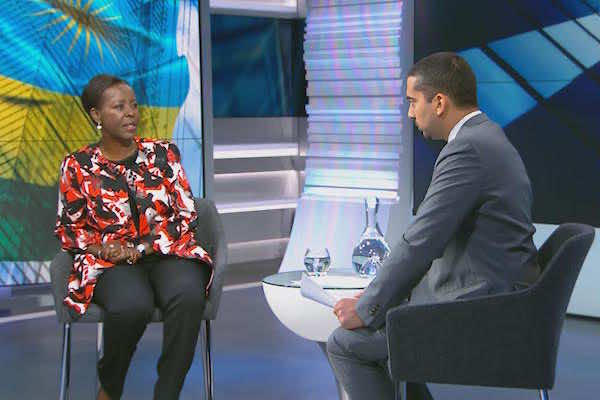 “Let me put it this way, Rwanda, as any other country that I know of, has its own way of doing things,” Mushikiwabo said in response to the remark that Rwanda seems to be on its own in defending itself. “And not everybody should be agreeing with what the government of Rwanda is doing.”

On Rwanda’s intolerance for opposition voices and government criticism, UpFront host Mehdi Hasan asked Mushikiwabo if she really believed the BBC was banned from Rwanda because it promoted “genocide ideology.”

“Yes, yes, absolutely. The BBC produced a documentary film which is a total denial of the history of Rwanda, particularly the history of the genocide,” she said. “In Rwanda that is not acceptable.”

Mushikiwabo also commented on the alleged murder in 2014 of exiled Rwandan intelligence officer Patrick Karegeya, who was found dead in his hotel room in Johannesburg. Hasan asked Mushikiwabo if defense Mmnister James Kabarebe’s response to the killing – “When you choose to be a dog, you die like a dog” – suggested the government’s complicity in Karegeya’s death.

“Let me again put it this way: I don’t know anybody who betrays a country that gets rewarded,” she said.

In an intense exchange with Hasan, the foreign minister asserted that Karegeya, who was allegedly killed while in exile despite never having been convicted of a crime, threatened Rwanda. “Why should I be unhappy about my enemies and people who threaten?” she asked.

When it came to Rwanda’s involvement in the violent political crisis in neighbouring Burundi, Mushikiwabo insisted her country’s only association was in taking care of Burundan refugees. She commented on the crisis, saying, “When people make wrong choices then they have to live with the consequences.”

Mushikiwabo, however, denied the UN Panel of Experts’ report from earlier this year that accuses Rwanda of recruiting and training Burundan refugees in Rwanda with the goal of ousting Burundan President Pierre Nkurunziza. “If I wanted to overthrow I would use my own army; I would not pick up children in a refugee camp,” she said. “Rwanda has better and more effective ways of causing trouble if that is what the Rwandan government wanted.”

Discussing President Kagame’s recent comments that no one in the media, the UN, or human rights organisations has the moral right to criticise him or Rwanda at all, Mushikiwabo said, “What the president is saying is what he believes. President Kagame is a very accountable man, and everything he’s done for Rwanda is out in the open.”

Last December, President Kagame (who came into power in 2000) supported a constitutional amendment that would allow him to run for a third seven-year term and seek two additional five-year terms, potentially staying in office until 2034. When asked if she supported it, Mushikiwabo said, “Absolutely.”

“President Kagame has responded to what the people of Rwanda wanted, and there is nothing wrong with that,” she contended. “I don’t see what’s wrong with staying in office. I think what we need to be worried about is what people do while in office.”