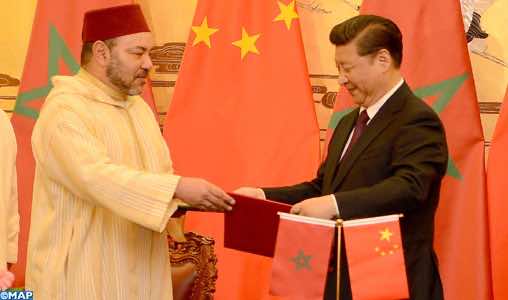 China’s Belt and Road Initiative is a strategic project aiming to “promote the economic prosperity and cooperation between  the two countries along the Belt and Road, which includes Africa, Europe and Asia. It also aims to strengthen exchanges and mutual learning between different civilizations, while promoting world peace and development,” according to the Chinese government.

This initiative greatly emphasizes the importance of bilateral and multilateral relations, in which all parties’ interests are met.

Morocco has proven to be a more than qualified candidate to become China’s partner in this initiative. Due to its strategic location along the Strait of Gibraltar and its proximity to various markets (including Europe the Maghreb and sub-Saharan Africa), Morocco has obvious reasons for becoming a “platform for interregional trade and investment,” according to Foreign Affairs.

Moulay Hafid Elalamy, the Moroccan Minister of Trade, Industry and New Technologies, noted in an interview with the 21st Century Business Herald that “Recently, Morocco has become Africa’s second largest investor. This demonstrates our desire to get closely involved in Africa’s construction. China needs to rely on strong African partners to ensure the success of the ‘Belt and Road Initiative.’ We believe that our country is one of such strong partners. Morocco has many promising industries including agriculture and food processing, automobiles, aviation, textiles and garments, electronics, and renewable energy.”

Included in the 15 bilateral agreements was a project aimed at creating an industrial park in the Tangier-Tetouan-al Hoceima (TTAH) region. This project was launched after a memorandum was signed by the Chinese group HAITE, which operates in civil and military aviation, aerospace, energy, real estate and insurance sectors, as well as Deputy Secretary General Moulay Hafid Elalamy of the Modernity and Authenticity Party, and president of the TTAH region Ilyas El Omari.

Furthermore, Moulay Hafid Elalamy stated, “China and Morocco have complementary advantages. Morocco is developing its labor-intensive industries, while China needs to promote innovation, expand its domestic market, and keep its cost advantage. Theoretically, the two countries’ strategies have already been connected with each other. What we need now is broader cooperation and a number of successful projects to show the benefits of the Chinese-Moroccan partnership and the significance of connecting our development strategies.”

The industrial park, which will be located in Tangier, will act as the host for Chinese businesses and as a central point for Chinese exports between Africa and Europe. This zone will not only be industrial, but also residential, as it is said to eventually welcome 300,000 residents and will span across 1000 and 2000 square meters.

The project also promises certain advantages such as: creation of Moroccan jobs, the arrival of more Chinese citizens in Morocco, the spread of new Chinese technology, and the use of Moroccan goods to complete Chinese chains of production.

The key sectors that will operate in this industrial zone will include aerospace, textile and automobile.  It will require an investment of 10 billion dollars in total.