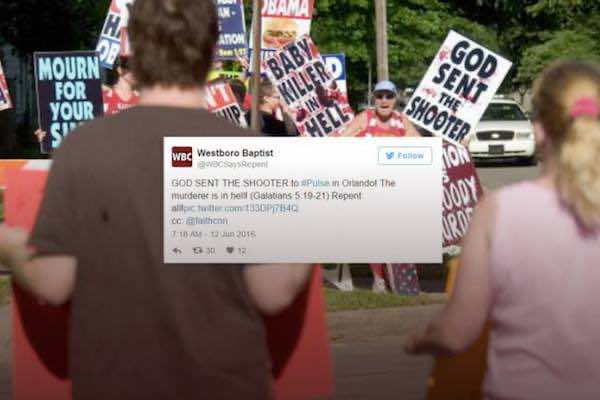 Rabat – While many mourn the loss of their loved ones killed in the Orlando shooting, The Westboro Baptist Church celebrates the tragedy by saying, “God sent the shooter.”

The 61-year-old church, infamous for its anti-LGBT pickets at schools and funerals of gays and lesbians, has continued its hateful discourse on social media.

Dozens of hateful parodies, videos and pictures are posted on the group’s Twitter page, blaming LGBT people for the Orlando shooting. “God Sent The Orlando Nightclub Shooter And Your “Gay Pride” And Prayers Only Make It Worse,” the group’s page says.

Many wonder how something as catastrophic as this could have happened, but The Westboro Baptist Church claims it makes complete sense. “We thank/praise God, who in His infinite wisdom sent the shooter to: 1) execute wrath, 2)mercifully chasten,” the group’s Twitter page says.

The Westboro Baptist Church, widely described as a hate group, traditionally pickets at schools, political sites, funerals or protests involving the LGBT community. However, it has publically shunned Lady Gaga, Michael Jackson, and Barack Obama as well. The group is not only against LGBT people, but also Jews, Muslims, Catholics, politicians, and the media.

Although the group Tweeted, “ORLANDO BOUND” yesterday, there are no definite details about if, when, or where it will picket the Orlando shooting. The groups website, “Godhatesfags.com,” has no information on a possible appearance either.

The 40-member church is located in Topeka, Kansas and monitored by The Southern Poverty Law Center and The Anti-Defamation League. In 1955, the church was created by Reverend Fred Phelps, a disbarred lawyer and politician, who died in 2014. Today, it comprises many of his family members, which include: his children, grandchildren, and relatives by marriage.

“Fred Phelps will not be missed by the LGBT community, people with HIV/AIDS and the millions of decent people across the world who found what he and his followers do deeply hurtful and offensive,” said the National Gay and Lesbian Task Force in a report released by CNN.

In many instances, members of the Westboro Baptist Church have been attacked, beaten, and tackled, not only by regular people but also by law enforcement. Many people now say, the group’s slogan should change from “God Hates Fags,” to “God Hates Everybody,” as the members can be seen holding posters that read, “God Hates Children,” “God Hates Fat,” “God Hates America,” “God Hates You,” and “God Is Your Enemy.”

Additional posts by The Westboro Baptist Church include the following.

All posts can be found by searching their multiple Twitter handles, which are often deleted by social media platforms: @GodHatesFagsWBC, @WBCSaysRepent.