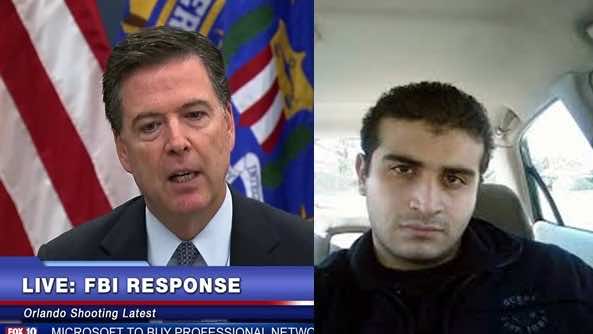 Rabat – The U.S. Federal Bureau of Investigations chief Jim Comey said on Monday that the bureau had investigated and interrogated the Orlando shooter on three occasions over the last three years on suspicion he might have been a radicalized Islamic terrorist, as reported by TIME magazine.

The investigation was eventually dropped.

The public, then, is wondering why Omar Mateen’s behavior was alarming enough to attract the attention of the FBI but not enough to prevent the massacre of at least 49 people early Sunday at an LGBT nightclub in Orlando.

The NYTimes reports that the case began in 2013 when Mateen’s co-workers said he had boasted ties to the terrorist groups Hezbollah and Al Qaeda. He was working as a security guard at the St. Lucie Country Courthouse in Fort Pierce, Florida, but was removed when the local sheriff heard of the remarks. The security contractor transferred him to work at a residential golfing community, and the sheriff alerted the F.B.I.

But government officials said his claim had been dubious from the beginning, according to the NYTimes. Hezbollah is a Shiite group Al Qaeda is Sunni. But agents opened what is known as a preliminary investigation. They secretly followed him and monitored his movements in search of evidence that Mateen was a member of a terrorist group or is planning a specific terrorist attack.

The FBI got one extension after the preliminary investigation; they interviewed him twice and dispatched an informant to get close to him, then closed the case after a total of ten months, according to TIME.

TIME also reports that the FBI has been increasingly aggressive in its undercover operations, even posing agents as terrorist instigators and drawing potential radicalized Americans into fake plots. Once the would-be terrorists agree to a plot, or to travel to a foreign country in support of a foreign terrorist organization, they are arrested for breaking the laws against providing material support to terrorists.

This led to the arrest of 59 men and women in 2015 for supporting ISIS.

While some terrorism experts praise the efforts, civil libertarians have criticized them as entrapment, said TIME magazine.

However, Mateen’s name resurfaced two months later as an associate of an American who had gone to Syria and become a suicide bomber for an al Qaeda affiliate there.

According to Comey, the two had known each other because they attended the same mosque. But Comey said the investigation didn’t reveal any ties of any consequence between the two of them.

Yet, in the midst of the massacre Sunday morning, Mateen expressed “solidarity” with the suicide bomber on one of the three calls with 911 dispatchers, Comey said, according to TIME.

This still has some wondering if he had been on a watch list, could agents have been alerted to the gun sale.

Deputy Attorney General Sally Q. Yates said, “Certainly in retrospect in this case we would have liked to have known about it,” as reported by the NYTimes.

However, they couldn’t have stopped him from buying a gun; Congress blocked an attempt last year to give the F.B.I the power to block gun sales to people on terrorism watch lists, according to the NYTimes.

However, Yates also told the NYTimes that the Justice Department would consider a new policy in which the FBI is alerted on gun sales to people who were previously under investigation for terrorism.