Harira is a Moroccan traditional soup that is an essential to Ramadan. It is made with garbanzo beans, lentils, fresh vegetables, and sometimes beef. The ingredients are then left to simmer together in tomato sauce with spices like saffron and ginger.

Chebakia is a deep-fried pastry made of strips of dough rolled to resemble a rose and coated with honey and sesame. It is of Moroccan origin and differs in name from city to city.

Briouates are sweet puff pastries that can be filled with meat mixed with cheese, lemon and pepper, or vegetables. They are wrapped in warqa in a triangular or cylindrical shape. 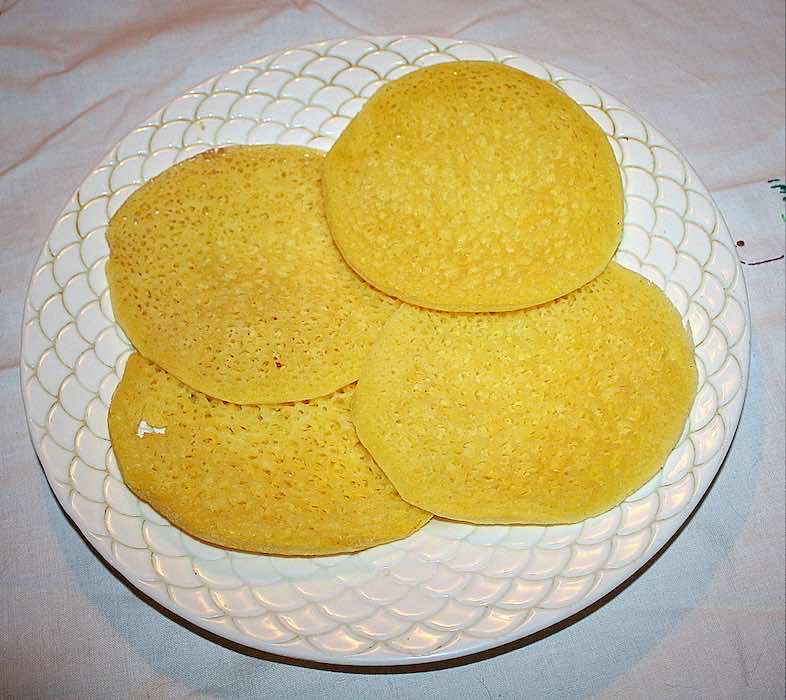 Baghrir is an ancient Berber pancake that is small and spongy, made with flour or semolina, and characterized by its tiny holes. It originates from North Africa, and is most popular in Morocco and Algeria.

Gullac is a Turkish dessert made with milk, pomegranate, and a special kind of pastry. This dessert has been a traditional food since the Ottoman Empire, during the late 1400s.  Despite being a traditional pastry, its popularity spikes during the month of Ramadan.

Pastirma is a very seasoned, air-dried beef which gets its name from the Turkish horsemen in central Asia who pressed meat on their saddles in order to preserve them. Pastirma is seen as a delicacy that can be eaten with a variety of side dishes.

Chorba is a soup or stew that is made of vermicelli and spices such as turmeric, ginger and paprika. This soup is popular in many countries, including those in North Africa, across the Balkans, Central Asia and the Middle East. The soup, however, does differ slightly from country to country.

Chekchouka is a dish consisting of eggs poached in a sauce of tomatoes, chili peppers, and onions, often spiced with cumin. Its origin is unknown, but it has become a staple in countries located in North Africa and the Levant today.

Algerian Boureks are filled pastries made of thin flaky dough known as phyllo. Bourek (Börek) is found in many countries, due to its origins in the Ottoman Empire.

Kolak Pisang is a variation of an Indonesian dessert made of palm or coconut sugar, coconut milk, and pandanus leaf, with added bananas.

Bubur Lambuk is a popular rice porridge. It is made with a mixture of lemongrass, spices, vegetables, and chicken or beef.

Ketupat is a type of dumpling made from rice packed inside a diamond-shaped container of woven palm leaf pouch.

Haleem is a stew made of meat, lentils, and pounded wheat made into a thick paste. This dish is found beyond India, Pakistan, and Bangladesh alone. It is also present in the Middle East, although less popular. The first recipe of haleem is said to date from the 10th Century.

Biryani is a mixed rice dish made with spices, rice, lentils, meat and vegetables. The two main types of biryani are pakki, which means cooked, and kacchi, which means raw. Despite being originally cooked with meat, the dish has adapted to its environment and can now be either vegetarian or non-vegetarian (called Tehari).

Malpuas are pancakes served as a dessert or a snack. They are made by crushing either bananas or coconut, and then adding flour, water, or milk. There are many variations of this dish depending on the region, such as pineapples or mangoes instead of bananas. In India, malpuas do not contain fruit.

Jalebi is a sweet sort of pastry made by deep-frying a wheat flour batter in pretzel or circular shapes, which are then soaked in sugar syrup. It is also known as Zulbia. For Christians in West Asia, it is served for the Feast of the Theophany, and for Muslims it is used during Ramadan.

Samosas are fried or baked with spiced potatoes, onions, peas, lentils, macaroni, noodles, and/or minced meat filling. Samosas are said to have originated in the Middle East and were introduced to India by Muslim merchants from Central Asia. Samosas differ slightly from country to country.

Bocor katiitow is popular in southern Somalia, and is a squash dish with cardamom and sugar.

Kac Kac are Somali doughnuts made by deep frying bread.

Mahshi is a dish made of stuffed squash, marrow, or zucchini. It is popular in countries from the Balkans and the Levant, given its historical popularity in Ottoman territory. The dish can vary between being made with or without meat.

Jallab is a popular Ramadan drink made of carob, fruit syrup, dates, grape molasses, and rose water. It also uses artificial coloring and is smoked with Arab incense.

Kamruddin is made by squeezing hundreds of kilograms of apricots, then mixing it with glucose syrup. It is then sun-dried and becomes a thick paste.

Adas is a lemony lentil soup very popular during Ramadan, especially in Syria.

Konafa is a cheese pastry soaked in sweet, sugar-based syrup popular in the Levant and former Ottoman regions. There are three variants of this dish: the rough one, called khishnah, the fine one called na’ama, and the mixed one, called mhayara.

Katayefs are sweet dumplings filled with cream or nuts. It was traditionally made and sold by street vendors and is popular in Egypt and the Levant.