Fez - King Mohammed VI on Wednesday visited several historic sites that have been restored under the rehabilitation program of the monuments of the old medina of Fez, with a budget of 285.5 million dirhams. 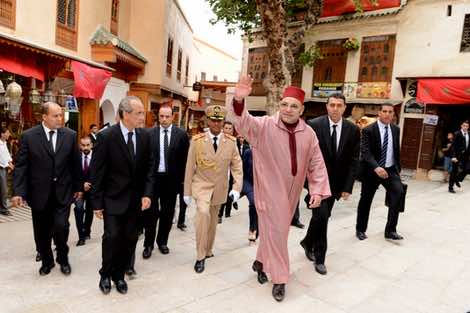 Fez – King Mohammed VI on Wednesday visited several historic sites that have been restored under the rehabilitation program of the monuments of the old medina of Fez, with a budget of 285.5 million dirhams.

This visit demonstrates the continued commitment of the King to preserve the architectural character of the medina of Fez and encourage the development of this ancient city, listed in 1981 as World Heritage by the United Nations Educational, Educational, Scientific and Cultural Organization (UNESCO).

The King visited the Terrafine bridge, built by Zenete emir Dunas in the eleventh century, Sebbaghine Souk, which dates back to the Zenete era in the tenth century, madrasas Mohammadia, founded in the late thirteenth century and renovated by Sultan Mohammed V in the twentieth century, Seffarine, first madrasah of the Marinid dynasty in Morocco (675H/1276 AD) and Mesbahiya, built north of the Al Qaraouiyine Mosque by Marinid Sultan Abu Hassan in 1347.

The King also visited Dar Al Mouaqqit, a tower built during the reign of Marinid Sultan Abu Inan in order to control the astronomical map, former agency of Bank Al Maghreb (early twentieth century), foundouk Kettanine (nineteenth century in the time of Sultan My Hassan I), Hammam bin Abbad (fourteenth century), Dar Lazrek, founded in the Marinid era in the fifteenth century, Khrachfiyine bridge (eleventh century) and the forts of Sidi Bounafae and Boutouil, built by Saadi dyanasty during the 16th century.

Capital project for the preservation of the collective memory, the restoration of these 13 historical monuments, which required a budget of over 92 million dirhams, falls in line with the approach advocated by the King to enhance the intellectual capital, one of the main criteria of the nation’s wealth.

These restoration projects are part of the rehabilitation program of the historic sites of the old medina of Fez, whose framework agreement was signed on March 4, 2013 under the chairmanship of King Mohammed VI.

This renovation program provides for restoring 27 historic sites, 26 of which are already completed, and the 27th will be launched in 2016.

The renovation of these sites was made by a team of master craftsmen who reproduced exactly the same buildings, using their skill, ingenuity and ancestral knowledge.

The restoration of these various sites will contribute to strengthening tourist tours at the old medina of Fez, promoting the city’s social and economic development and preserving its material heritage that reflects the greatness of a glorious architectural past and the authenticity of an unparalleled expertise in the cultural, urban and social fields.