Rabat - The citizens of Fez offered an historic welcome to King Mohammed VI on Tuesday afternoon. 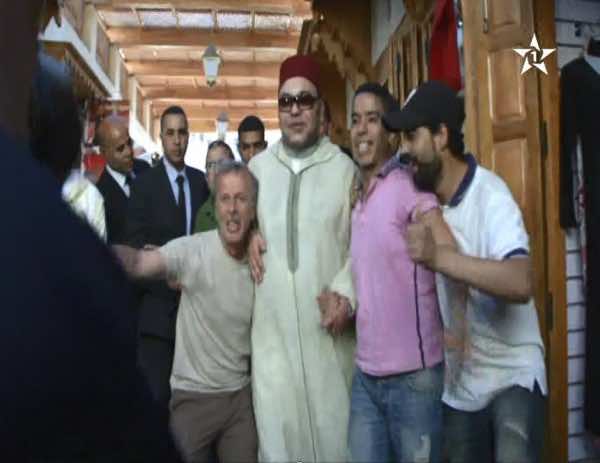 Rabat – The citizens of Fez offered an historic welcome to King Mohammed VI on Tuesday afternoon.

The Moroccan monarch chaired on Tuesday at the Al Qaraouiyine Mosque in Fez the inauguration ceremony of the Higher Council of the Mohammed VI Foundation for African Ulema.

As soon as he exited the mosque, known for hosting the oldest university in the world, passersby and small business owners lined up to greet him and shower him with their respect and love.

The Moroccan King stopped to greet many of his countrymen and take pictures with them.

This is first time since his coronation that King Mohammed VI took a tour of the narrow alleyways of the old medina. He made sure to enquire about the advancement of the project he launched in 2013 to renovate and restore over 27 century-old sites that were in state of collapse.

The project has breathed new life into the old city and has given it a new facelift, with the goal of eventually enabling it to attract more tourists in the future and contribute to social and economic development.

The old city of Fez, known as the spiritual capital of the country, was listed as a World Heritage Site in 1981 by the United Nations Educational, Scientific and Cultural Organization (UNESCO).

Historians and tourism experts say it may be one of the best tourist destinations worldwide. In addition to being the capital of Moroccan cuisine and handicraft, Fez is home to the world’s oldest university, in which famous historical personalities have lived and studied. Among those is Muslim historiographer Ibn Khaldun, considered to be among the most prominent figures of modern sociology, historiography, and economics.

In addition, Fez has over 35 kilometers of walls, and it is the largest medieval city in the world. It is also home to what it is known locally as Maristan, considered to be the first psychiatric facility in the world.