Rabat - The Fès-Saiss Association and the South North Centre organize in partnership with The Spirit of Fes Foundation and with the support of the Fès-Meknès Region and the BMCE Foundation the twelfth international festival of Amazigh culture from 15 to 17 July 2016 in Fez under the theme: "Amazigh and Mediterranean Cultures: Living together" 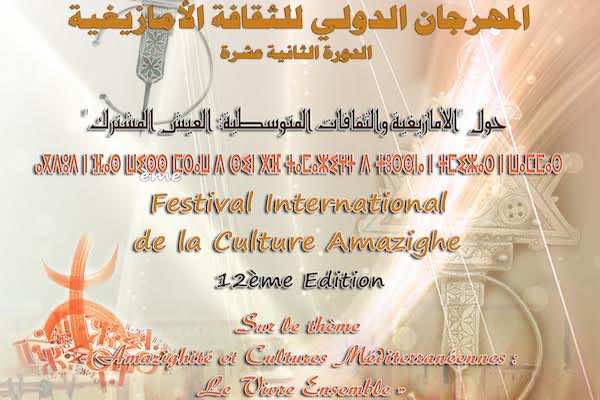 Rabat – The Fès-Saiss Association and the South North Centre organize in partnership with The Spirit of Fes Foundation and with the support of the Fès-Meknès Region and the BMCE Foundation the twelfth international festival of Amazigh culture from 15 to 17 July 2016 in Fez under the theme: “Amazigh and Mediterranean Cultures: Living together”

This festival is part of the High Royal Directives relating to the promotion of Amazigh culture and Moroccan culture in general. The highlight of this initiative is the emphasis on the important role of the Amazigh and intangible heritage of Mediterranean cultures in human development and their contributions to the culture of peace. The festival focuses on intercultural and interreligious dialogue and the role of Amazigh culture in the process of democratization in the Maghreb and in the maintenance of peace. This is to establish coherent strategies to consolidate intercultural dialogue, social cohesion and democratic culture throughout the Mediterranean region.

As part of the International Decade for the Rapprochement of Cultures (2013-2022) and the program of action for a culture of peace and non-violence, the city of Fez hosts the International Festival of Amazigh culture and Mediterranean cultures from 15 to 17 July 2016 at the palais des congrès.

This festival consists of four events:

-An International forum on the theme: “Amazighness and Mediterranean Cultures: Living together”, to be held at the palais des congrès.

– An exhibition of arts and crafts at the palais des congrès.

Featuring in this international festival the Franco-Algerian artist Ali Amrane, Nouamane Lahlou, Nass El Ghiwane, the artists Cherifa Kersit,  Badr Habit, the Ahidous dance, flaminco  dance and many other stars of the Amazigh and Mediterranean song .

10 Mediterranean countries will participate in the Festival whose objectives are:

– to bring together artists and intellectuals of the countries of the Mediterranean to create a synergy around the Arts and Cultures, as factors of dialogue, understanding and peace.

– to together the largest number of stakeholders of the Mediterranean countries without distinction of origin and religion, all those who work for the humanistic values ??of freedom, solidarity, and peace to combat violence and extremism in a crucial time for the Region.

– to display a positive image of the Amazigh culture and the southern shore cultures by the quality and creativity of its artists and fruitful exchanges that may result from such gatherings, because there is a complementarity and mutual enrichment in the field of Arts Art and crafts.

The axis of the approach is the transmission of intangible heritage that is common to the countries on both sides. The event is part of a larger project that began in 2005 and includes several components: training, production and promotion. The transmission is performed between Amazigh confirmed artists and young artists who deserve to be known, between generations and between countries on both shores.

The expected effects of this Festival are the exchanges, dialogue between artists, designers and associations from different artistic fields and Mediterranean countries to develop joint projects at the regional level.

The festival also aims to bring together artists and intellectuals around humanist and progressive values, to educate the general public about the role of culture and its impact on human and social development, but also to promote Amazigh and Mediterranean cultures and their contribution to the culture of peace and rapprochement of cultures.

One of the main goals of this international forum is to discuss an integrated approach to the role of cultural and religious dialogue in the consolidation of modernity and democracy, an approach that emphasizes the human and social dimension, because at the heart of the issue of culture is a human and socio-economic dimension. The forum also aims to open up new avenues of thought and perspectives to move to another phase of the debate on the difference that would seek to link the political orientation based on cultural difference, democratic politics of social justice and lasting peace.

To attain fruitful exchanges, we propose to debate the following axes that integrate social, economic, cultural, religious and political aspects and question the theoretical, methodological and practical elements of multiculturalism that characterizes the Mediterranean region.

The axes listed on the agenda of this forum are:

-Insights on the history of interchange between Amazigh and Mediterranean cultures

-Multiculturalism,  multilingualism and education in the Mediterranean region

-Fighting extremism and violence in the region

-The role of dialogue and language in conflict resolution

– Multiculturalism, migration and creative art in the Mediterranean

– The problem of refugees in the region

The forum is an opportunity for experts, researchers, and civil society leaders to discuss issues related to history, modernity, and cultural diversity and their role in the consolidation of peace, democracy, development, and social cohesion.