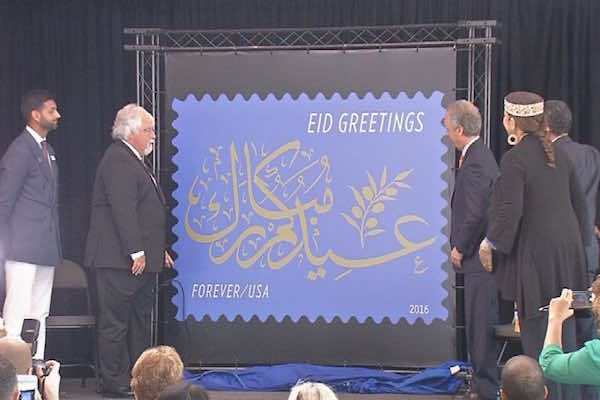 The new 2016 Eid stamp is blue with gold calligraphy in Arabic that features a traditional Eid greeting: May your Eid be blessed.

The postal service says it decided to introduce this year’s stamp in Louisville because it was the birthplace of Muhammad Ali, who was Muslim, according to WDRB.com.

“Today is a day of celebration, because what the U.S. Postal Service is doing, is that they’re giving us the opportunity to educate the world about Islam, that Islam is a religion of peace, as Muhammad Ali said often,” Donald Lassere, president and CEO of the Muhammad Ali Center said.

The two most important Eid festivals—Eid al-Fitr and Eid al-Adha—will be celebrated on July 6 and Sept. 12 this year.

The postal service has been releasing stamps to commemorate the Islamic holidays since 2001. President George W. Bush ordered the first stamp to honor the Muslim festival, just before the September 11 attacks, according to World Religion News.

Arab Daily News writer Ray Hanania says that the issuance of the stamp “has nothing to do with terrorism, but everything to do with the tradition of the United States recognizing major religious holidays,” as reported by World Religion News.