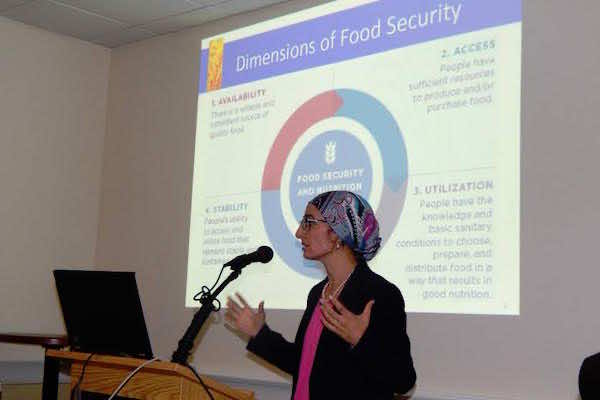 Rabat – It is undeniable that wheat has been a necessary ingredient in Moroccans’ diet for centuries. An essential ingredient for bread, wheat is present in almost every daily meal in Moroccan households, whether or not it is needed for the meal in question.

Ranging from the High Atlas’ thin tannourt and tafernout breads to the more commonly known batbout and khobz breads, and various flavorful Moroccan pastries, wheat flour takes on different shapes and forms as it gradually comes to life in the Moroccan households’ ovens.

But where does so much wheat come from? Can Morocco keep up with such a high demand from its population?

Ahmed and Hamrick explain that Moroccans consume almost 4 times the world’s average in wheat. They also note that Morocco has a strong dependence on wheat imports, making it highly vulnerable to global food volatility.

Morocco World News caught up with Ghada Ahmed after her two week stay in Morocco and got further information on the issues regarding what she calls “a very political and sentimental crop in the MENA region.”

MWN: In your research, you explain that the Moroccan government has been actively promoting domestic wheat production. Can you explain what this entails, exactly?

Ghada Ahmed: When it comes to government support, it’s not unusual for a country to offer it, and there are a number of ways that a government can offer its help in this sector. The government policies in Morocco include two main mechanisms that are very similar to what other countries have done. It declares a guaranteed purchase price for domestic wheat. It also puts in place high import tariffs during the domestic wheat season to make wheat imports very expensive for traders. These policies encourage farmers to grow wheat and millers to buy local wheat and ensure the consumption of domestic wheat. The government has to balance between a number of sensitive challenges such as protecting domestic production, managing the trade balance, and managing the outflow of foreign currency.

MWN: What are some challenges that may come along with the government supporting such a production sector?

Ghada Ahmed: The only way that cereal production is possible in Morocco and its neighboring regions is by having a substantial amount of support from the government. It is a very difficult industry when it comes to the MENA region because it requires a lot of water and arable land and the lack of these two necessities are the most difficult issues that Morocco and its neighbors face.

Challenges in this case are always present when it comes to the interactions between the wheat producers and other actors in the chain including the organizations that buy the wheat, the millers, the bakers, and at the end of the line, the consumer. The interesting aspect of the Moroccan consumer is that he/she expects high quality bread. The consumption of bread and types of bread that are available are quite impressive and the consumption is particularly high, since bread is an essential part of every meal. But this also means that the Moroccan consumer is accustomed to high quality wheat, which is more expensive.

MWN: After seeing various facets of the wheat growth industry in Morocco, what are, in your opinion, other ways that Morocco can further kick-start domestic wheat production?

Ghada Ahmed: Before answering that question, I would first like to mention that we were impressed by the operation of the private wheat sector in Morocco. The level of sophistication that we saw among the traders and some of the millers is unique to Morocco and unlike what we saw in other MENA region countries such as Egypt. By impressive, I mean that the companies seem to be very well trained and understand how global markets and import structures function and are able to capitalize on that.

However, the Moroccan wheat market is also facing challenges that are associated with import barriers during certain times of the year, domestic wheat and subsidized flours. For example, higher import tariffs during the Moroccan wheat season may cause the Moroccan wheat buyers to somewhat miss out on lower prices internationally. Also, when domestic wheat is collected, it usually contains other materials which millers have to remove. Extensive cleaning at the milling stage is time consuming and costly for these firms. The quality of domestic wheat varies and is not necessarily up to the consumer’s end use standards. Moroccan millers end up having to mix the local harvest with imported wheat to improve the quality of the flour and make sure that the consumer eats the kind of bread that he or she expect.

Another problem that is always associated with subsidized flour that we did not hear about a lot during our visit is waste and leakage. Some of the industry stakeholders we met discussed that subsidized flour is not necessarily consumed by the needy, that it is accessible for everyone, and that it would be best to restructure the subsidy system to target the poor.

When it comes to solutions to further improve domestic wheat production, it gets a bit tricky because we underestimate the importance of solutions that can improve the quality and the quantity of wheat. For example, taking steps to improving seed quality, train farmers on better use of fertilizers, and increasing yield from arable land can improve wheat output. Also, investing in research and development to promote innovation, use of technology and development of new seeds and varieties is important.

MWN: Is it economically assured that stable Moroccan wheat production will continue?

Ghada Ahmed: The price of wheat import isn’t high nowadays. However, global wheat prices are high when global supply shrinks or is disrupted because of major event such as droughts in exporting countries, trade bans, or geopolitical dynamics.

There are generally four elements that need to be in place to build a more resilient wheat system: good infrastructure to support imports, exports and domestic production, higher quality and yield of domestic production, a vibrant private sector, and a set of good policies that are responsive to shifts in markets and conditions.

Wheat is a very political and sentimental crop in the MENA region, and because of that it is very difficult for countries to make decisions around it. Our research shows that Morocco will not have difficulty importing wheat provided that global supply is not disrupted. Actors in the industry are savvy in global markets, and the country has sufficient foreign reserves. It is important for the industry stakeholders to further develop infrastructure that supports agriculture and trade while investing in education and raising awareness about global wheat and agriculture commodity markets. We found that lack of awareness about the workings of agriculture, commodity markets and the impact of import barriers causes stakeholders to miss out on market opportunities and lower costs.

We visited many organizations and stakeholders that are in charge of food import, food industry or wheat import from May 14 to May 28 in order to find out more about agriculture in Morocco.