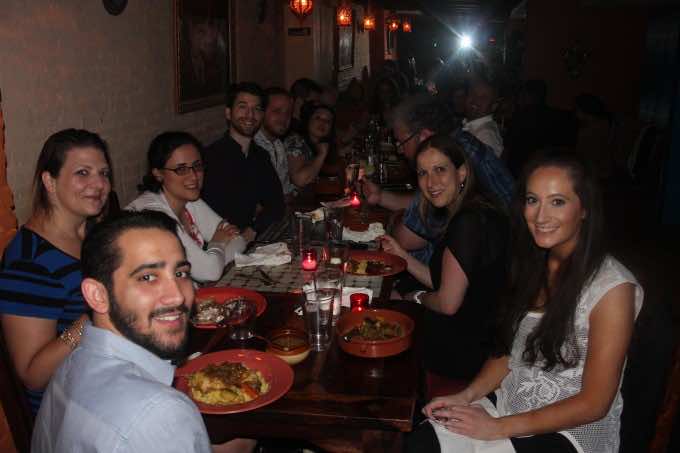 New York – On Saturday, June 4, we hosted our fifth dinner aimed at bringing together young Jewish and Moroccan professionals in New York for a night of great food, wonderful conversation, and meaningful connections. Despite rainy weather, and many conflicting events, the evening brought together nearly twenty people of diverse backgrounds and interests, ranging from Chinese language translators and documentary filmmakers to indigenous rights activists from Canada.

We also had a special guest — Ryan Bellerose, a storyteller and writer, who frequently talks about the connection of various indigenous groups to their lands. Over an authentic multi-course meal, which mirrored the type of food that would normally be eaten in Moroccan households, we discussed each other’s backgrounds, heard stories, and explored the climate surrounding the identity engagement in our societies.  We were more at ease than ever before, and people moved around throughout the evening, entering conversations they would not otherwise have been privy to.

Still, despite the different topics, backgrounds, and diverse opinions on important topics of the day, everyone present at the table had one thing in common: a very strong sense of identity. What brought everyone to the table (besides the realization that Moroccan food is wonderful) is not only curiosity about the culture of the others, but the willingness and ability to share one’s own.  Each person in the room came from a tradition of strong ties to their families, communities, traditions, and land.

The context in which we choose to explore our identities is one that helps us flourish and learn new traditions, while strengthening, rather than sacrificing or compromising, our roots. As we work together to find our voices, our interactions help us define the most important, most beautiful aspects of our backgrounds ideas we would like to share with the world. Our unique stories and our individual narratives, which are often left unexplored by dry academic courses, transcend the traditional paradigms of cartoonish stereotypes perpetuated by the media. What makes our narratives both unique and particularly relatable to each other is the ease with which we integrate the plurality of cultures and circumstances as they pass through realms.

Morocco is a pluralistic country, home to a number of cultures, blending and working together, enhancing the cultural scene, the sounds of musical performances, the cuisine, and internal dynamics. Jews are a nation that travels, both literally and figuratively. Over millennia, we have wandered the world over and likewise integrated many elements of the cultures and traditions we passed through into our identities.

The time has come to move past the bagel-and-lox image of being Jewish, which has been rooted in New York minds for the past century or so, and to turn inwards, to look back into our past. Moroccan Jews, some of whom have attended our dinners, represent the full spectrum of the merging of complex identities in a culture. They have come from Spain and from other countries in the area, and even the many Jews who have left Morocco have curiously retained a very strong connection to the country and a strong relationship to their identity. The ones who have expressed interest in the cultural events we have been organizing were proud and fascinated with their complex backgrounds, have grown up on kosher Moroccan food and, in some cases, have learned local dialects, remaining attuned to where they came from.

For non-Moroccan Jews, these dinners represent an important opportunity, not only to explore an interesting distinct culture, but to reconnect with their Mizrahi brethren, purposely, as an effort to understand the full spectrum of Jewish culture beyond the majority Ashkenazi (Easter European and German) that dominates the American Jewish discourse.  A society where each representative has a strong identity and a history of unique and distinct tradition is a society that will flourish, for there will be no shortage of exchange of ideas and richness of conversations.

Rather than fearing the boogey man of cultural appropriation, we embrace cultural appreciation and the possibility of sharing something of value that another person may enjoy and experience. Giving and receiving the gift of cultural innovation is not insulting, nor is it an attack on the culture from which we borrow with gratitude , but rather a compliment to the strength and importance of everything it has to offer.

Our group, drinking mint Moroccan style tea, watching the foam form as the metal tea kettle is held up high, consists of people who are not afraid of being challenged by learning something new, or by appreciating beautiful national garments, or by eating anything other than stereotypical American fare, whatever that even is, given that the U.S. was formed out of a diversity of cultures from the very start. What is as important to note as the value we gain from tasting and touching Moroccan culture in its many manifestations, is the joy the Moroccan community, both Jewish and Muslim, that is sharing it.

This is not a group of people offended by newcomers enjoying its food and then trying to make it at home, or wearing henna tattoos at a party as an homage to the atmosphere. On the contrary, Moroccans of all backgrounds generally tend to enjoy their food and music, and be the most convivial companions, who are excited and happy to meet anyone who is interested in learning more about Moroccan culture. It is this healthy attitude that has led to this diverse, and sophisticated tradition to begin with; it will guarantee that it will not suffer from being transported to the American context, but on the contrary, it will flourish, reach new audiences, and innovate, while always staying true to its roots.