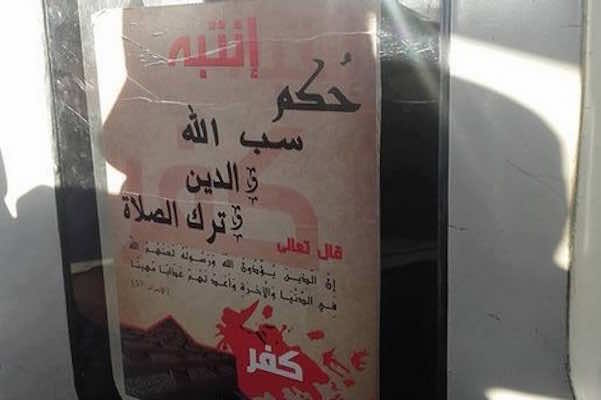 By
Larbi Arbaoui
-
Larbi is a freelance writer and assistant editor at Morocco World News.
Jun 22, 2016
Spread the love

Intelligence and security forces in Tetouan, near Tangier, were on heightened alert over the widespread placement of radical religious posters calling explicitly to consider non-praying people and those who insult God and religion as infidels.

According to the online newspaper Alyaoum24, posters calling for the excommunication of those who do not perform their prayers were anonymously hung in different locations in the northern city of Tetouan and on its “Vitalis” city buses.

“Warning. This is the judgment of those who insult God, religion, or abandon prayer,” state the posters. Under these phrases written in bold, the poster displays a verse of the holy Quran about praying.

It also says the word “Kafir,” or infidel, in stark white letters on a background of a pool of blood.

The same source said that anonymous people had tried to spread their radical beliefs by hanging posters on the streets of the city and on some of its buses.

The photos that explicitly call for the excommunication of non-practicing Muslims or those who insult God or religion went viral on social media, with comments denouncing such extremist speech that may encourage ignorant people to judge others and possibly act accordingly.

Authorities have reportedly taken down these posters and are still searching for the individual or group behind this radical act.