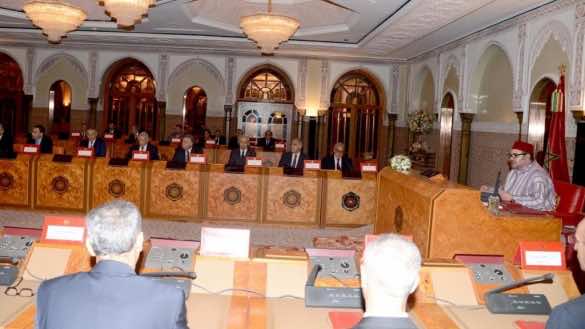 In view of the forthcoming parliamentary elections, the Council examined and adopted two draft organic laws amending and supplementing the two organic laws on the House of Representatives and political parties.

The council approved the draft organic law establishing the conditions and modalities of application of Article 133 of the Constitution.

It also adopted the draft organic law supplementing and amending the Organic Law on the appointment to the high office in accordance with Articles 49 and 92 of the Constitution.

During this meeting, Minister of Industry, Trade, investment and Digital Economy made a presentation before the King on the general guidelines for development of national legal and institutional system relating to investment.

Pursuant to Article 49 of the Constitution and on the proposal of the Head of Government and the initiative of the Minister of Interior, the King has appointed:

– Abdelfattah Bjioui as Wali of the Marrakech-Safi region, Governor of the prefecture of Marrakech

– Mohamed Fattah as Governor of the province of Khenifra

– Al Houcine Chaynane as Governor of the province of Safi

– Abdelhaq Hamdaoui, as Governor of the province of Sefrou

– Mohamed Moufakir as Wali attached to the Central Administration.

Pursuant to Article 49 of the Constitution and on the proposal of the Head of Government and the initiative of the Minister of Foreign Affairs and Cooperation, the King has appointed:

– Mohamed Ali Lazrak as Ambassador, Secretary-General of the Ministry of Foreign Affairs and Cooperation,

– Mohamed Lotfi Aoued as Ambassador of the King to Canada

– Mohamed Methqal as Ambassador, Director General of the Moroccan Agency for International Cooperation

– Mohamed Basri as Ambassador, Director of Consular and Social Affairs, Ministry of Foreign Affairs and Cooperation

– Abdelkader El Ansari as Ambassador of the King to South Africa

– Abdellatif Errouja as Ambassador of the King to Chad.

Subsequently, the Council of Ministers approved thirteen international agreements accompanied by bills. These are the following multilateral agreements: The status of the Islamic Telecommunications Union, the Council of Europe on counterfeiting medical products and similar crimes involving threats to public health and the Paris Agreement on Climate Change.

The ten bilateral agreements concern the encouragement and protection of investments, double taxation and the fight against tax evasion in the field of income tax, cooperation in the fields of water, fishing and shipping, as well as an agreement in the military field.