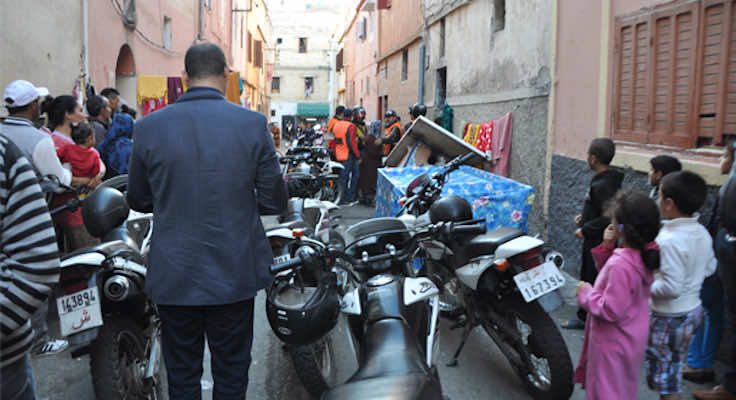 Rabat – A Moroccan Human Rights Association member was verbally and physically assaulted along with her husband in Marrakech on June 17.

The issue led to disagreements between the AMDH and Marrakech police.

Sarah, a young Marrakech resident and AMDH advocate left her home at around 7PM on June 17 wearing a simple shirt and jeans. According to Telquel, while Sarah walked through her neighborhood in El Kasbah, a male stopped her, insulting her for her clothing, which he deemed inappropriate for the month of Ramadan.

The young woman immediately called her husband to join her as she faced the male. The couple was then assaulted by many of their neighbors.

Omar Arbib, member of the Marrakech AMDH office, told Telquel that “the couple did not wait long before filing a complaint to the local authorities.” However, the couple agreed to drop the complaint after reaching a settlement with their neighbors.

Following the incident, the AMDH issued a press release in support of the two victims saying, “We [AMDH] condemn any rise of citizen aggression as well as any organized groups attempting to prevent any forms of vices through violence or assassinations.”

The Marrakech local authorities issued a press release on June 19 in response, explaining that “power rests solely with the authorities, and citizens cannot usurp that role by setting ‘street codes.’” The Regional Court also added that “Nobody makes the rules apart from the authorities,” noting that it was the “provocative actions” of the couple that caused the neighbors’ reactions.

This launched a back-and-forth dialogue between both parties as the AMDH responded the next day with a second press release.

Arbib also told Telquel that such a response from the authorities and such surprising comments from the regional court were not worthy of the legal framework a press release should entail.

These were not the first tensions between the AMDH and the authorities, and this occurrence seems to simply add fuel to the fire as the authorities in question banned many of AMDH’s activities, including conferences, from taking place.