Panama City - Morocco took part Sunday in the opening ceremony of the expansion of the Panama Canal. 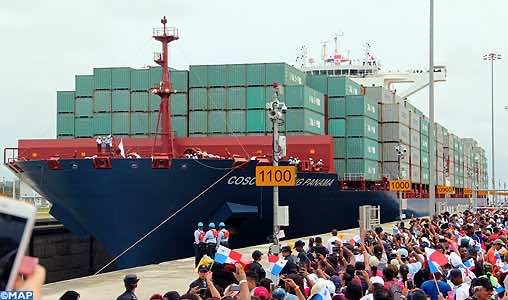 Panama City – Morocco took part Sunday in the opening ceremony of the expansion of the Panama Canal.

The ceremony was marked by the passage of the Chinese-owned Cosco Shipping Panama through the Atlantic locks at Agua Clara in the early morning, sailed the 50-mile passage to the Cocoli locks near the capital and passed into the Pacific in the evening, stewarded by tugboats and cheered by dignitaries and exuberant crowds of thousands.

“This is an achievement that all of us Panamanians should be proud of,” President Juan Carlos Varela said at the inaugural ceremony on the outskirts of Panama City.

“Today marks a historic moment for Panama, for our hemisphere and the world,” he added.

According to the official website of the canal expansion, the Panama Canal expansion is based on six years of research, which included more than 100 studies on the economic feasibility, market demand, environmental impact and other technical engineering aspects.

Works on the Panama Canal Expansion began on September 2007 at a total cost of US $5.2 billion.