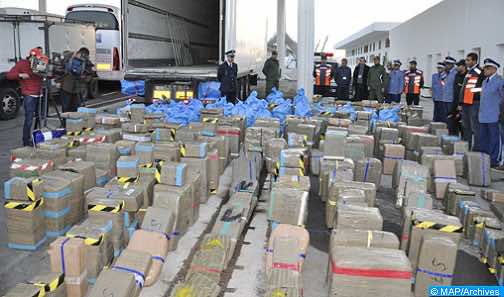 Rabat – Almost 5.5 tons (4,950 kg) of cannabis was seized from a shipping container in Tangier on Sunday. The cannabis was discovered when the container was scanned by the national security organization DGSN.

It was most likely going to be exported to Europe, which is where the majority of Moroccan cannabis exports are sold.

The driver of the vehicle was remanded in custody pending the investigation to identify other people involved in the case, according to Maghreb Arab Press (MAP).

Since the beginning of April 2016, at least 28 tons of cannabis products have been seized. In 2013, a shipment of 17.5 tons was confiscated. Based upon the size of these shipments, it can be implied that cannabis exporters are very confident in their ability to smuggle the illegal drugs.

The UN World Drug Report of 2016 stated that Morocco is the world’s leading producer of Cannabis resin. It is one of the main agricultural products of the Rif region of Morocco.