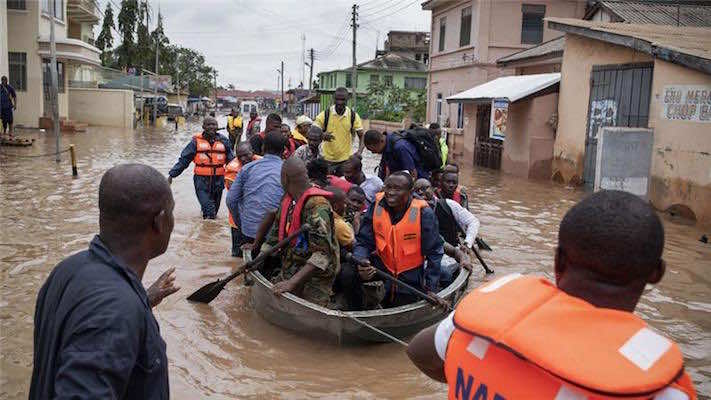 Rabat – After a tremendous amount of rainfall in Ghana, at least ten people have died and much of the capital city of Accra remains underwater. Homes and transportation routes have been disrupted as well. The average amount of rainfall in Ghana in the month of June is 178mm; Accra received 185mm of rain in one day. An additional 50mm fell in the following week. The rainy season is expected to continue into early July.

Flood and disaster risk maps were created for Ghana last October, and were designed to help leaders make decisions quickly during natural disasters. “The disaster risk maps shall provide us with increased knowledge and better understanding of disaster risk for better decision making and evidence based environmental planning in Ghana,” said The United Nations Development Program Country Director, Dominic Sam.

The flood and disaster risk maps may not have considered a natural disaster of this size, however.

This rain did not come in time to help the local agriculture, which is predominantly cocoa. Harmattan winds are cold and dry, and blow across Ghana from the Sahara during the winter months. It tends to draw the moisture from the soil and makes farming difficult.

Criticism has risen regarding the sparse reporting by western media. Al Jazeera is the only major news source to have written about the disaster at the time of publication. Some view this as a trend in western reporting; Afua Hirsch, a reporter in West Africa, wrote that African news is not considered important in European or American news sources unless it is sensationalist or confirms stereotypes.

“Africa is not, as the New York Review of Books reported recently, “plagued by countless nasty little wars,” Hirsch wrote.

In an essay, “How to Write About Africa,” Binyavanga Wainaina, a Kenyan writer, said, “you must always include The Starving African, who wanders the refugee camp nearly naked, and waits for the benevolence of the west. Her children have flies on their eyelids and pot bellies, and her breasts are flat and empty. She must look utterly helpless. She can have no past, no history; such diversions ruin the dramatic moment. Moans are good.”