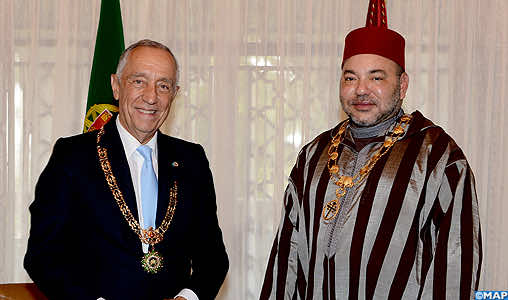 “For centuries, we have historical ties with Morocco (…). This visit allowed us to further strengthen these relations,” the Portuguese President told the press.

He also noted that his visit to Morocco is of great importance to his country, which seeks to develop its relations with Morocco in all areas, especially the economic and political fields through promoting trade and visits exchange at the government level, adding that the two countries have recently signed an agreement in the energy field.

Portuguese investors are increasingly interested in Morocco’s business opportunities, especially in the fields of tourism and industry, said Rebelo de Sousa, stressing that his country is closely following Morocco’s development in all fields.

In this regard, he welcomed the efforts of the Kingdom to promote the political, economic and social development under the leadership of HM the King.

Portuguese President also noted that his visit to Morocco was an opportunity to discuss with Moroccan officials various bilateral issues and other topics of common interest, including relations between Europe and Africa, the presence of the two countries on the African continent and the Middle East.