Rabat - Nigel Farage, leader of the United Kingdom Independence Party (UKIP), addressed the EU parliament today to speak about Brexit. His speech took a self-congratulatory and berating tone, as his rhetoric focused on the enormity of last week’s political event rather than hammering out trade deals or Brexit itself. 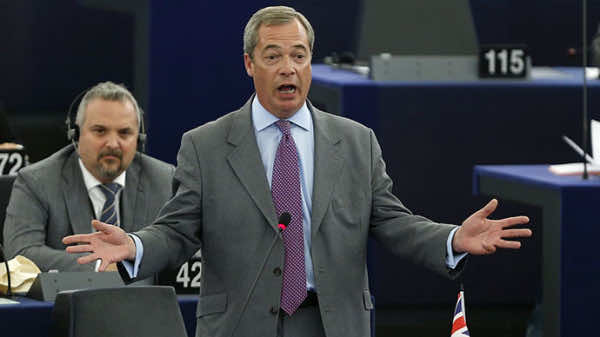 Rabat – Nigel Farage, leader of the United Kingdom Independence Party (UKIP), addressed the EU parliament today to speak about Brexit. His speech took a self-congratulatory and berating tone, as his rhetoric focused on the enormity of last week’s political event rather than hammering out trade deals or Brexit itself.

He began with the line: Isn’t it funny…when I came here 17 years ago and I said I wanted to lead a campaign to get Britain to leave the European Union, you all laughed at me. Well, you’re not laughing now.”

Farage’s speech continued to analyze the reasons for the European Parliament’s reaction as he claimed that: “You, as a political project, are in denial.” He described the EU as a collection of inept bureaucrats who snatched power from their people to consolidate into an even larger international bureaucracy.

To a rising tide of booing and some scattered applause, he sarcastically complimented the success of the EU’s “policy to impose poverty on Greece and the rest of the Mediterranean.” Likewise, he criticized the body for passively accepting German Chancellor Angela Merkel’s supposed policy of admitting all migrants to the European Union.

Citing “deception” as the EU’s method for imposing their governing body and “oppressing” the people of Britain and Europe, he offered Brexit as a “beacon of hope” for leaving the European Union, and predicted more national exits to follow Britain’s.

The one point on which Farage seemed to agree with his EU counterparts was that Article 50 of the Lisbon Treaty, which initiates Britain’s political departure, should be activated without delay. He encouraged a “grown-up” negotiation from the EU with Britain concerning trade, to a particularly swelling chorus of disapproving shouts.

“I know that virtually none of you have ever done a proper job in your lives,” he continued, “or indeed ever created a job.” His calls to listen were drowned out by another tide of shouting.

President of the European Parliament Martin Schulz then demanded order, telling the body that “you are acting like UKIP normally acts in this chamber, so please don’t imitate them.” Schulz went on to criticize Farage’s most recent claim, and then allowed him to continue.

Farage moved on to “pragmatic economics,” and threatened the EU with dire financial consequences if they spitefully refuse to accept a trade deal of this kind. “Let’s cut between us a sensible tariff-free trade deal, and thereafter recognize that UK…will be your best friends in the world.”

“Allow us to pursue our global ambitions,” he added, concluding his speech.

Farage’s reception was overwhelmingly negative in the session. Across Europe, the globalists who dominate ruling parties show little sympathy to Britain for its recent decision, while an increasingly powerful nationalist movement throughout the continent lauds British efforts to leave the EU. The success of Farage’s diplomatic strategy of insulting the European Parliament and then threatening them to accept a friendly trade deal has yet to be determined. The hostility between the British representative and the European representatives was abundantly clear, and may characterize their relationship in the near future. While this speech was political theater rather than concrete foreign policy, it does not bode well for Farage’s offer of the two bodies becoming the “best friends in the world.”