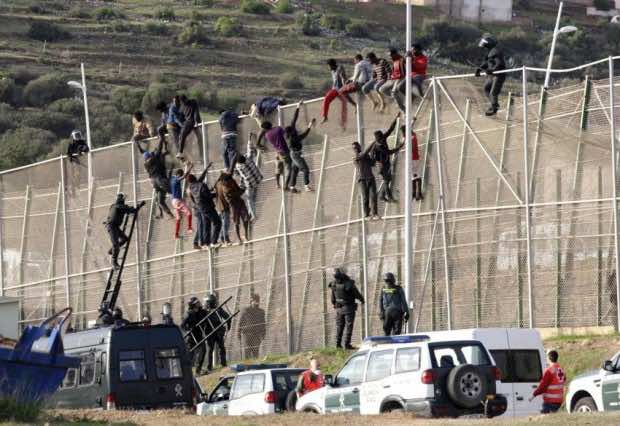 Rabat – About 30 of more than 100 migrants successfully jumped the border fence from Morocco into Spain’s North African enclave of Melilla on Sunday, a local government official told Agence France Presse.

The incident is the tenth attempt to storm the fence this year, as reported by AFP, with some 50 migrants managing to get into Melilla.

Irene Flores, spokeswoman for the local government told AFP that a group of 120 people from Sub-Saharan Africa stormed the six-meter high fence early on Sunday morning.

The migrants chanted “victory, victory” as they arrived at the CETI, the short-stay immigrant center, where they usually stop for a few weeks before they seek to reach continental Spain and either stay there or travel throughout Europe, as reported by Reuters.

Spain has two enclaves in Morocco, Ceuta and Melilla, and migrants from all over Africa regularly try to reach them, by climbing the triple barriers that separate them from Morocco or swimming along the coastline.

The border system in Melilla is composed of two six-meter-high fences, with a crisscross of steel cables in between, according to AFP.

After thousands of migrants crossed from Africa to the enclave in 2014 and 2015, Spain stepped up security at the Melilla border last year. Although there is no official data, just a few dozen are believed to have made it so far in 2016, according to Reuters.