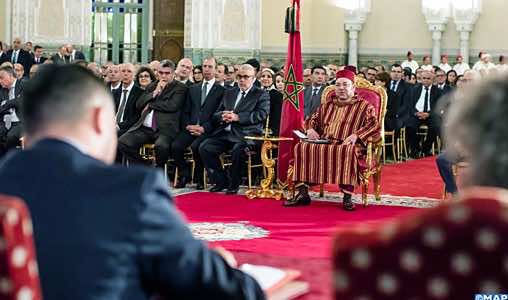 At the beginning of this ceremony, Minister of Industry, Trade, Investment and Digital Economy, Moulay Hafid Elalamy, presented before the King the new plan which is fully in line with the efforts of the Kingdom to create the conditions for sustainable economic growth, where private investment plays a leading role.

This new plan revolves, according to Elalamy, around six main areas, namely the recalibration of the Investment Charter and the redefinition of its content, the adoption of new support measures and incentives to investment, the restructuring of the investment promotion bodies, the creation of a General Directorate of Industry and another dedicated to Commerce, and the reform of the digital strategy.

On this occasion, the minister presented the achievements made under the Accelerated Industrial Plan, launched by the Sovereign on April 2, 2014, focusing on the Central indicator of Employment.

This ambitious plan aims to create 500,000 new jobs over seven years, increase the share of industrial GDP by 9 points and improve the trade balance, the minister said, noting that 160,000 jobs have been contracted in investment projects that have been launched over the last 2 years.

He added that this momentum will be reinforced today with the signing, under the chairmanship of the King, of 30 creations of factories, totaling 39,000 jobs and a total investment of MAD 7.5 billion.

“These achievements are the result of the efforts of all the forces of the Kingdom, under the enlightened vision of the sovereign”, he pointed out, stressing that the security and stability enjoyed by the country, the level of our infrastructure and the quality of our human resources, are a valuable physical and intangible capital sought by all investors.

The ceremony was marked by the screening of a film comprising the testimonies of presidents of industrial federations about the success of public-private partnership, a partnership that has helped reconfigure the different sectors into performing Ecosystems and implement the implantation of these ecosystems.

On this occasion, King Mohammed VI chaired the signing ceremony of a partnership agreement between the Ministry of Industry, Trade, Investment and Digital Economy and Office Chérifien des Phosphates for the establishment and development of OCP industrial ecosystem around large companies and Moroccan subcontracting SMEs, as well as 30 investment contracts generating 39,000 jobs and 7.5 billion investments.