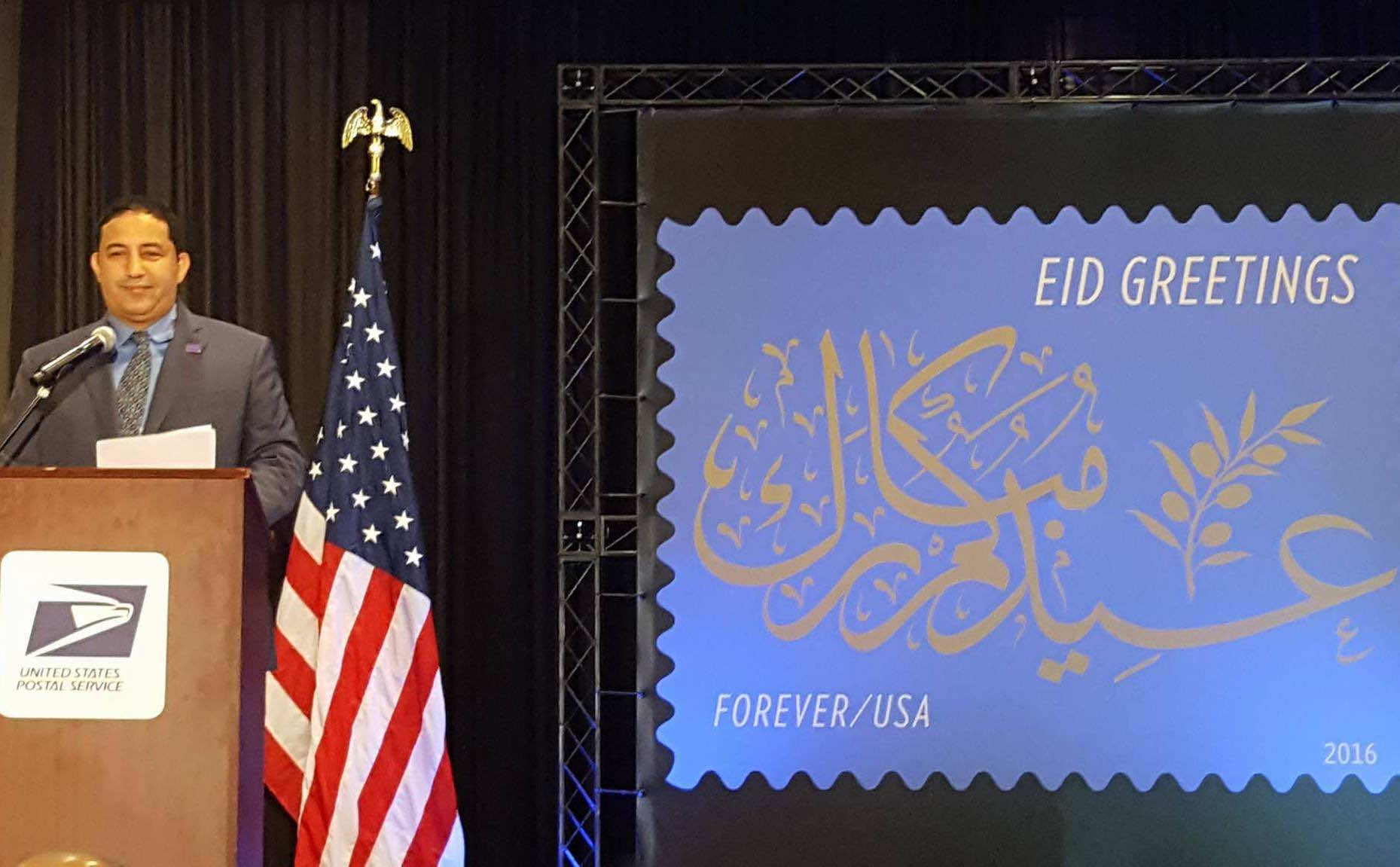 Fouad Khalil, a Moroccan-American and Communications Specialist, CTO/Information Technology at the USPS, served as the Master of Ceremonies for this special celebration in recognition of his dedication and qualifications as a civil servant with the USPS and as a Muslim American.

“As a Muslim American originally from Morocco, I am very proud to lead this ceremony today because it is an acknowledgment of the role of the Muslim community in the US where the Moroccan community, regardless of its short history in the country, has succeeded in making a number of great contributions,” said Khalil told Morocco World News.

The Eid stamp was designed by artist and calligrapher Mohamed Zakariya and incorporates centuries of tradition in Muslim history.  It features gold calligraphy and an olive branch against a purple background commemorating the two most important festivals—or Eids—in the Islamic calendar: Eid al-Fitr and Eid al-Adha.

On these special days, Muslims wish each other Eidukum Mubarak, the phrase shown in Islamic calligraphy on the stamp. “The stamp is a very good example of how the U.S. acknowledges its ethnic, religious, and cultural diversity as well as respect of individual freedom,” said Khalil.  “It is also very symbolic as it comes at a time when islamophobia is on the rise.”

Khalil noted that the stamp itself has a special connection to his heart. Khalil described how the designer, Mohammed Zakaria, who was raised in California not as a Muslim and became an aerospace engineer,  said that “his trip to Morocco in 1961 would change his life and future career path. [Zakaria] was fascinated by the culture, religion, and language that he encountered in Morocco. It was this experience that led him to study and eventually convert to Islam.  However, his love for Arabic calligraphy began even earlier, when, as a boy in Santa Monica, he first saw a work of Arabic calligraphy hanging on the wall of an Armenian carpet shop.”

“It is very heartening to see how my country, Morocco, is a source of religious inspiration that has a global impact.”

The Islamic Center of America was chosen because it is one of the oldest and largest mosques in North America and because Dearborn, Michigan, holds one of the largest concentrations of Muslims in the US.

The ceremony concluded with a Quran recitation by student Ihssan Karimi from the Muslim American Youth Academy in Dearborn.