Bouarfa, Morocco – Stunned faces filled the crowd at an environmental awareness event in southeastern Morocco as attendees found out just how long their litter will be present in the environment.

The event, organized by the Bouarfa Association for Peace, Culture, and Youth Development (APCYD) and United States Peace Corps volunteers, called attention to the environmental impacts stemming from decisions citizens make in their daily lives. Its timely presentation marked the beginning of the “Zero Mika” campaign introduced across the country on July 1, 2016.

The production, sale, and distribution of plastic bags, dubbed “mika” in Moroccan Arabic, have been made illegal by Law 77-15. Among the campaigns goals are distributing alternative, sustainable bags, assisting former producers and distributors of plastic bags, and raising awareness about why plastic bags are being eliminated from Morocco. The event focused more broadly on all of the environmentally harmful materials used on a daily basis and gave community members ideas of how to recognize and reduce their impact – plastic bags being just the first step in a long process of transforming Morocco into a more environmentally friendly home for Moroccans and destination for foreign tourists.

The initial idea for the event was that of APCYD’s president, Abderrahmane Abdellaoui. APCYD’s executive committee and Peace Corps volunteers held various strategy sessions and visited public officials at Bouarfa’s city hall to secure financial and logistical support. The event was launched on Saturday, July 1 with an environmental training of trainers. Twenty young people from Bouarfa were trained on the key components of Law 77-15 and the goals of the Zero Mika campaign. Risks of plastic production and use were covered, along with the long-term effects of plastic bags on the environment, humans, and other animals. They brainstormed innovative techniques to assist the implementation of the law in Bouarfa, where they felt many community members either did not understand the new law or resisted it. 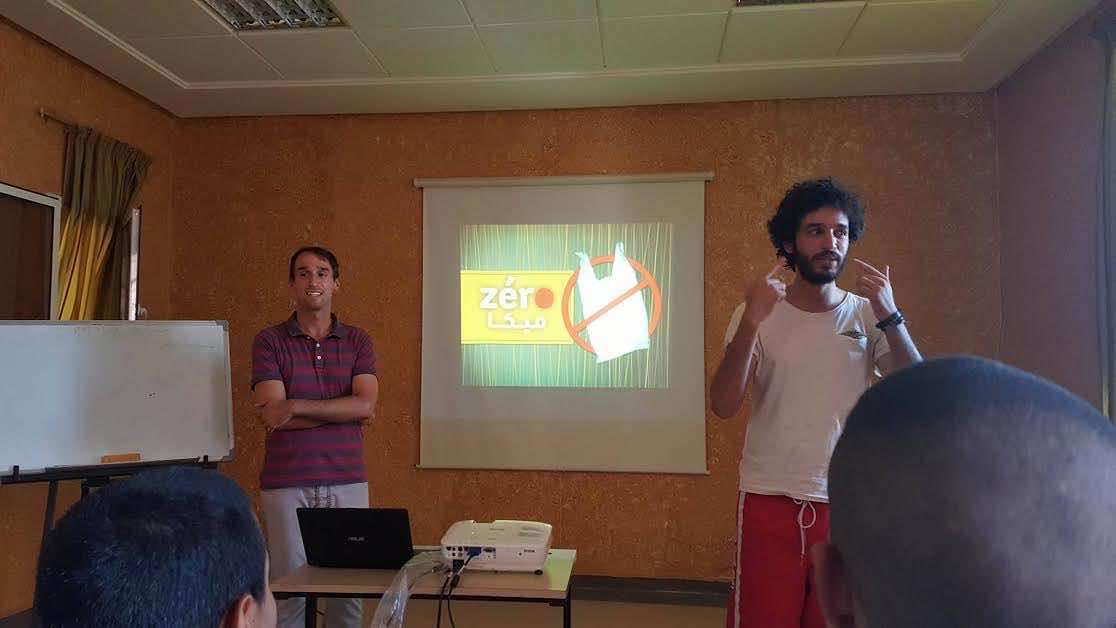 On Sunday, July 2, the youth leaders who attended the training reconvened to conduct a trash collection visiting many parts of Bouarfa, both urban and rural. The goal of the trash collection was two-fold: to raise public awareness and decrease littering and to gather common types of waste found in the city to use as educational material. As crowds gathered in the center of the city to enjoy one of the final nights of Ramadan, they were met by eager young people calling them to visit a presentation in front of the city youth center. The presentation included 16 common types of garbage found on the streets of Bouarfa. As community members visited the tables with garbage, they were asked to guess how long those particular types of waste take to decompose in nature. Their looks of shock and surprise could not be masked as the real amount of time necessary for decomposition of common items such as paint cans, batteries, and plastic bottles was revealed to them by the youth trainers.

More than 300 people received information about the environment and the Zero Mika campaign, nearly all of whom were convinced of the merit of the campaign after seeing and feeling the effect of their waste. One attendee exclaimed, “If we had known this information before, we would have stopped using plastic bags long ago! Just like we stopped using the thick, black plastic bags a few years ago, we have to be ready to make this change as well!” As people in Bouarfa learned, plastic bags only account for a small portion of total plastic usage worldwide. More than half of all plastic production in dedicated to single-use items, such as chips and snack packaging, bulk item wrapping, and vegetable and fruit packaging. Plastic bags do have a particularly heinous effect despite their small percentage of overall plastic production given their ability to blow thousands of miles, enter the water system, and tear into small pieces where they pollute the water and entangle, strangle, and choke living creatures.

Morocco is wise to take this step that only a handful of countries around the world have taken so far. Bangladesh, Rwanda, and Taiwan have already successfully implemented similar campaigns. Moroccans are innovative and creative and will surely adapt quickly to the new law as long as it is publicly seen as a positive step for the country. It will improve the lives of farmers with clean fields, tourism will increase if Morocco is seen as a healthy and clean destination, and citizens will feel proud of their country to longer see beautiful vistas covered in white, purple, and blue plastic bags. Encourage your community to hold similar educational events, and set up neighborhood associations to brainstorm about removing trash and carrying groceries. As many Moroccans themselves mentioned at the event in Bouarfa, plastic bags were not ubiquitous until the 1980s and 1990s, so it is possible once again for Moroccans to carry out all of their daily tasks without this harmful source of pollution!