Morocco World News
Home Highlights on Morocco King Mohammed VI: The Mediterranean Must Be an Area of Lasting Peace,...

Geneva - King Mohammed VI said that the Mediterranean must become, once again, an area of lasting peace and shared prosperity, and it should, once again, stand for sharing, mutual respect, tolerance and diversity. 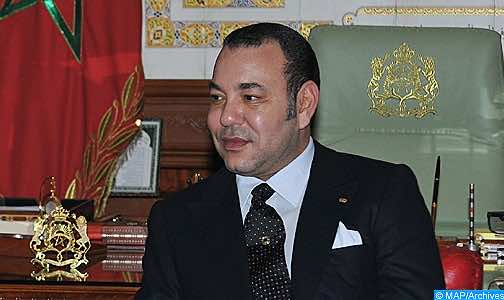 Geneva – King Mohammed VI said that the Mediterranean must become, once again, an area of lasting peace and shared prosperity, and it should, once again, stand for sharing, mutual respect, tolerance and diversity.

“We must reassert our human values and restore the greatness and splendor of the Mediterranean. Morocco, a nation which is proud of its Mediterranean identity, is working with other countries to achieve that objective,” said the sovereign in a message, on the occasion of the first Mediterranean Concert organized at the Geneva Palace of Nations.

“There are many perilous fault lines in the Mediterranean, ranging from the much desired but constantly postponed peace in the Middle East, the upsurge in violence, terrorism, extremism and inward-looking, isolationist attitudes, the migration tragedies, the management of common resources and environmental protection,” the King explained in a speech read out on Saturday by HRH Princess Lalla Hasna.

“To face up to the fear-mongers and isolationists who feed on extremist ideologies, we must show courage and resolve in order to talk to one another, listen to each other, understand and accept each other, and act together for the sake of all we have in common,” the sovereign asserted. The monarch went on to say that “it is probably at this level that artists have a role to play – that of making sure that this legacy we have inherited from the Mediterranean remains alive; that our interaction with the Mediterranean is peaceful and refined.”

The King said that “holding this concert today in the tragic, deteriorating environment prevailing in the Mediterranean provides an opportunity to celebrate, if only momentarily, our most exhilarating values – those of humanism, tolerance, freedom, dignity and mutual respect.” The sovereign hoped that Mediterranean countries will embrace the Mediterranean Concert and similar cultural initiatives by mobilizing their thinkers and their artists to face up to the proponents of reclusiveness, intolerance and extremism.

In the same vein, The Moroccan monarch said that Morocco has been consolidating its Arab and African Mediterranean roots, by positioning itself as a bridge between Europe and Africa, between the East and the West.

The history of the Kingdom of Morocco is a celebration of diversity – a key feature of our identity which has always been nurtured by the various dynasties that have existed in the country, in symbiosis with the Moroccan people, the monarch underlined.

The King pointed out that the Kingdom of Morocco has wholeheartedly embraced this choice, enshrining it in the preamble to its Constitution, which states that national unity was forged by the convergence of Arab-Islamic, Amazigh and Saharan-Hassani components, adding that it was enriched by African, Andalusian, Hebrew and Mediterranean elements.

“The humanism and modernity of the Moroccan approach are in line with the values advocated by the United Nations, namely those of the dialogue of civilizations, cultural diversity and the rejection of all forms of extremism,” the King emphasized.

“A country’s wealth should not be measured only in terms of economic indicators, but also – and especially, I would say – in light of its soft power, its stability, its history, its cultural richness and the depth of its heritage,” the sovereign noted.