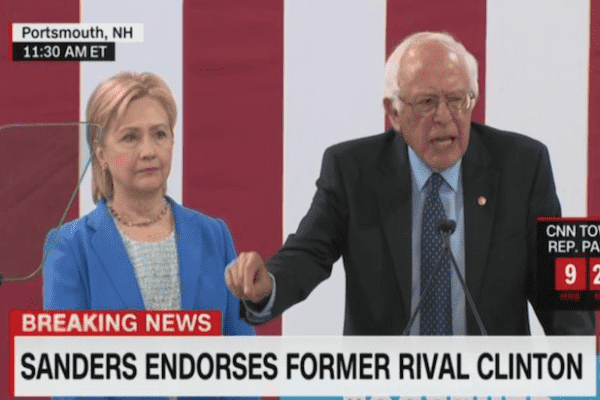 Taking the stage next to Secretary Clinton at a rally in New Hampshire, Sanders thanked the millions of Americans that had voted for him and supported his campaign.

“I am proud of the campaign we ran,” the Senator said. “Our campaign won the primaries and caucuses in 22 states, and when the roll call at the Democratic National Convention is announced, it will show that we won almost 1900 delegates… But it is not enough to win the nomination. Secretary Clinton goes into the convention with 389 more pledged delegates than we have and a lot more super delegates. She will be the Democratic nominee for president, and I intend to do everything I can to make certain she is the next president of the United States.”

Sanders noted the critical importance of this election for both America and the world, asserting that Clinton is “far and away the best candidate” to address the crises the United States faces.

Although Sanders had previously stated  that he would vote for Secretary Clinton in November, he had not yet formally endorsed her. After the primaries ended and it became clear that Secretary Clinton would become the nominee, Sanders used his remaining leverage to influence the party platform. However, after a progressive draft  of the platform was released on July 1, there was little reason to withhold his endorsement.