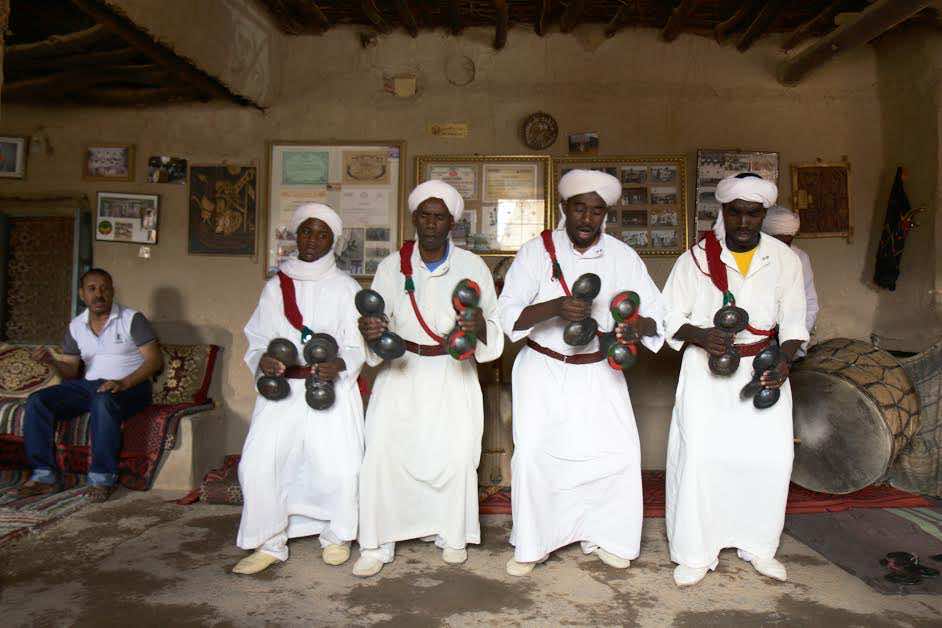 Rabat – A three-day trip to the Sahara in Merzouga offered us the stunning view of Southeastern Morocco.

Ten of my friends from the United States and I spent three days travelling across the Kingdom of Morocco and savored some of the most breathtaking sights in the dry, hot, and mountainous region before arriving at the Sahara desert. The 24-hour drive from Rabat to Merzouga and back introduced us to a grand kasbah in Ouarzazate, the freshness of the Todgha Gorge, the music of Gnawa, and the glorious Sahara desert.

A large courtyard welcomed us to the grand architecture of the Kasbah that rose up high into the sky. From a far, it looked like a large sand castle due to its earthy color built into levels of spacious rectangles. In the Kasbah were multi-level towers filled with hundreds of uniquely shaped and sized rooms completed with small windows the overlook the city of Ouarzazate.

The windings staircases continued to lead us to empty rooms that had low ceilings and lower doorways. A hollowed area parallel to rooms in the lower floors allowed us to peek through the abandoned Kasbah. A few of the rooms that overlook the city in the highest level of the Kasbah were decorated with colorful tiles, mosaic, stucco similar to those in the Bahia Palace in Marrakech.

Majestic in its grandeur, the Kasbah was once home to Thami el Glawi, the Pasha of Marrakech (1912-1956) and the Berber chief of the time. It is also a historical site preserved by the United Nations Educational, Scientific and Cultural Organization. Visitors are allowed to visit for MAD 20 with an additional fee for an English-speaking tour guide. 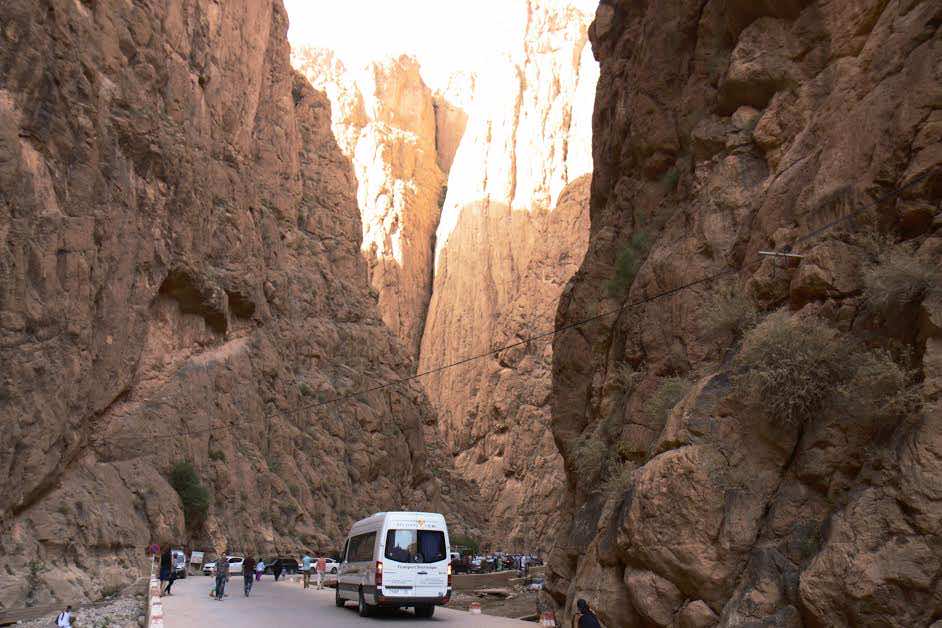 Often called as “the Grand Canyon of Morocco,” the Todgha Gorge canyon located in the eastern part of the High Atlas Mountains provided us a much-needed fresh break from our hours of travelling. At the mouth of the gorge is a 300 m-deep fault that splits the orange limestone into a divided that fits a river and a road wide enough for cars. We arrived at approximately 4:30 p.m. and enjoyed the coldness of the water along with hundreds of other local families and tourists.

Locals of all ages released the heat and showered themselves with the refreshing river flow. Though the water was shallow, the inclined plain leveled the river and created a small fall where people can sit and shower amid the gushing water. Some enjoyed sitting on the river bank and nearby rocks and look at visitors in the river. Others took plastic chairs and put their feet in the water, while there were also children and mothers sitting in the water. The road on the side of the river was crowded with cars trying to make a turn on the one-way street and vendors that sold souvenirs. 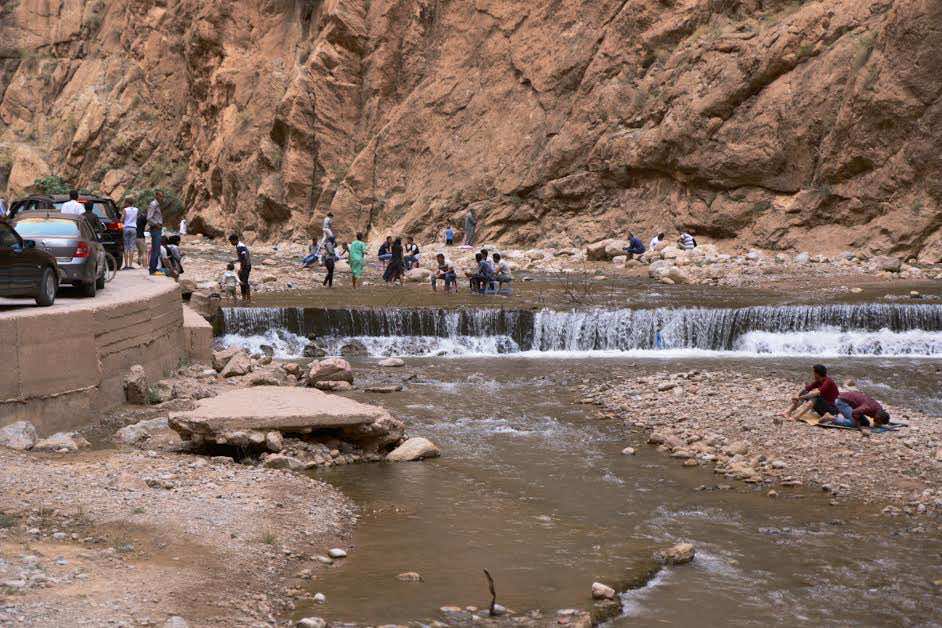 The dry and windy night became the background to our camel ride in the dunes as we traveled to our tents in the middle of the Sahara. Greeted with tagine “under the stars” in our tents, we moved on to Saharan music under the stars, and eventually climbed atop a meters-high sand dune to enjoy the starry sky. The clear sky magnified the beauty of the scattering stars. Though the wind was strong, some of us managed to lie on the dune and cover their nose and mouth with a scarf while others rolled down the sand dune. We buried our hands and feet in the hot sands and enjoyed the heat of the sand. 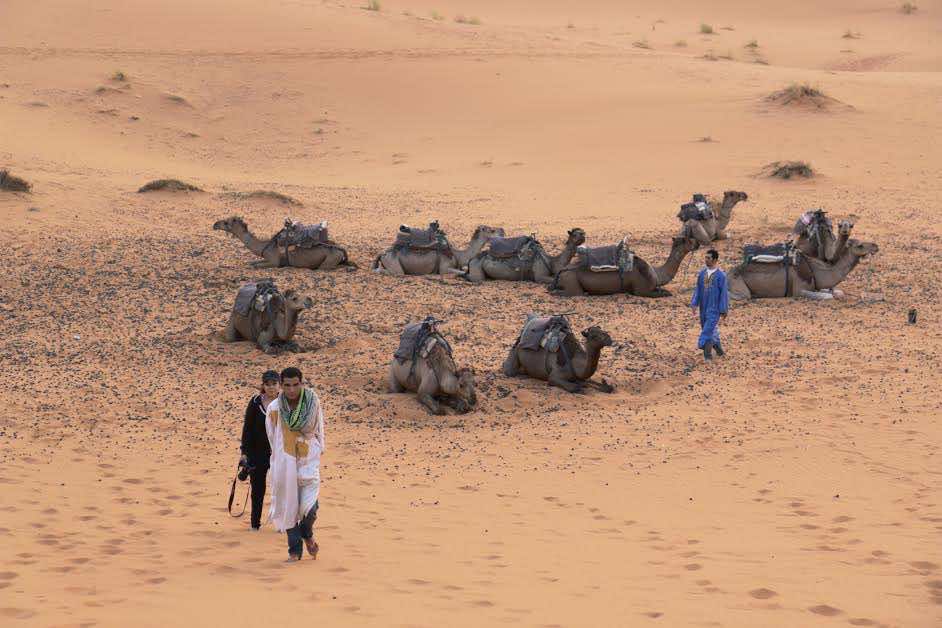 In the morning, we saw a little bit of the sunrise though the sky was cloudy. Up on the dunes we could see the vast and mystifying desert it its slightly mythical existence. Enjoying the morning in the central area between our tents, we moved to breakfast in a tent – the usual bread, jam, cheese, and Moroccan mint tea – before we had to travel through the dunes on a camel again to meet our driver. On the ride back to the car, the Sahara had a significantly different effect as we saw its beauty under the sun. The sand dunes seemed to glimmer in the sun as the shine complimented the smooth sand. The entirety of the view was breathtaking.

Five men wearing traditional white outfits serenaded our group in a musical showcase of the Gnawa music in the Khamlia village in Erg Chebbi. We were taken into a room, sat down and enjoyed listening to men creating rhythm with their hands on drums, percussion, and cymbals called krakeb. The five men moved their bodies to the music, particularly their hands and their feet making small steps backwards, forward, and sideways. Like most places in Morocco, we were greeted with mint tea and were later asked to join them in a dance.

Gnawa music mixes classical Islamic Sufism and pre-Islamic African traditions that create hypnotic trance yet upbeat music with lyrics such as “La Ilaha IllAllah” believed as a medium to connect with God. 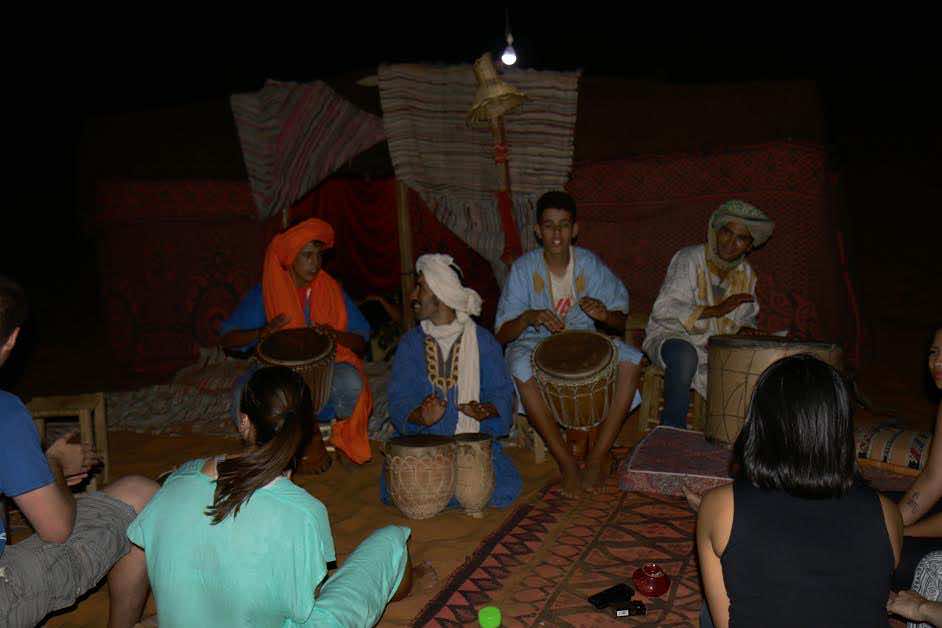