Rabat - Morocco and Venezuela discussed on Tuesday in Rabat means to boost bilateral cooperation especially at the parliamentary level. 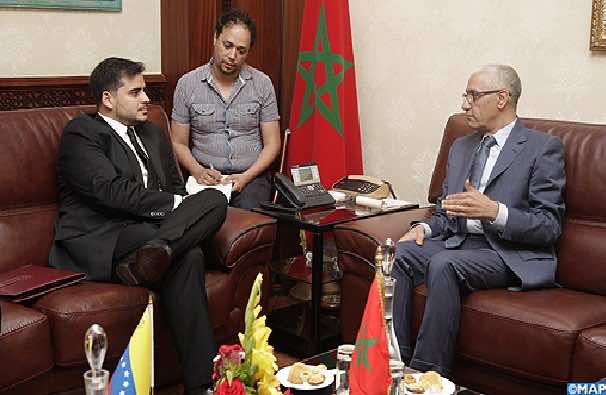 Rabat – Morocco and Venezuela discussed on Tuesday in Rabat means to boost bilateral cooperation especially at the parliamentary level.

This came in a meeting between Speaker of the House of Representatives (lower house), Rachid Talbi Alami, and a delegation of the Venezuelan National Assembly.

During the meeting Talbi Alami said that the visit of the Venezuelan delegation (July 18-22), led by MP and Vice President of the Committee of Defense, Armando Armas, is meant to boost cooperation between the two countries notably at the parliamentary, economic and cultural levels, said a statement of the lower house.

Talbi Alami stressed the importance of strengthening relations between the two countries’ legislative institutions, which will enable the exchange of views and ideas, clarify and coordinate stances on several regional and international issues, praising the level of relations between the Moroccan House of Representatives and several parliaments of South America.

He also highlighted Morocco’s achievements in terms of Human rights, security, the fight against terrorism and migration policy, adopted by the kingdom since 2013 that allowed more than 20,000 immigrants to have legal status and settle in the country.

Talbi Alami also presented the economic and social situation as well as the various large-scale projects launched in Morocco.

For their part, members of the Venezuelan delegation stressed the importance of strengthening relations between the two countries in several areas, notably at the level of parliament.