Rabat - Doctors are taking to the streets  in Rabat today to protest a law that would allow mutual health insurance companies to create their own care facilities and pharmacies, possibly cutting existing healthcare practices out of the industry. 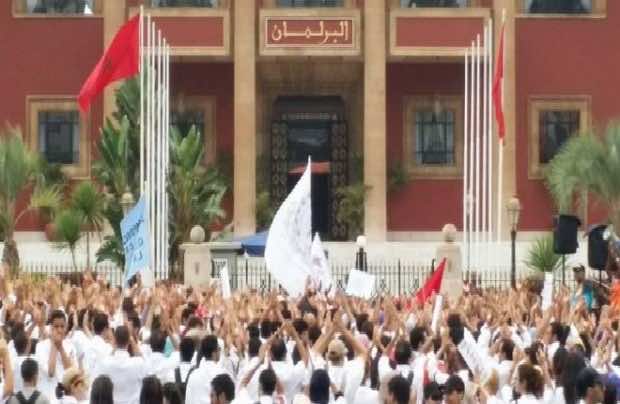 By
Bryn Miller
-
Bryn Miller is an rising sophomore at Claremont McKenna College majoring in International Relations and minoring in Arabic and Spanish.
Jul 20, 2016
Spread the love

Rabat – Doctors are taking to the streets  in Rabat today to protest a law that would allow mutual health insurance companies to create their own care facilities and pharmacies, possibly cutting existing healthcare practices out of the industry.

Draft Law 109-2, which the House of Representatives Committee on Social Services is expected  to adopt today, originally included a clause aiming to expand mutual health insurance plans without allowing the insurance companies to establish their own medical facilities. The House amended  the law in the spring to allow the companies to create their own healthcare centers and pharmacies, a move intended to increase medical infrastructure across the country and make it easier for citizens to access care and drugs.

However, doctors and medical professionals across the country began mobilizing against the provisions. Since the law would allow insurance providers to send patients exclusively to their own facilities, doctors fear that their business would suffer. A protester outside Parliament today told al-Yaom  that the law would oppose the principle of competitions and take away citizens’ right to choose their doctors. “This law is not legal from the beginning,” she said. “It is very, very dangerous in relation to general health.” Opponents have proposed that the government continue efforts to expand health insurance coverage while maintaining the existing third-party payer system. Currently, citizens covered by the mutual insurance groups may choose their own doctors and clinics outside the umbrella of the company.

In Morocco, all citizens are able to receive free or heavily subsidized care at public hospitals and facilities. However, public hospitals are often heavily overcrowded, lack infrastructure, and do not provide a high quality of care. The alternative, private clinics, are too expensive for the majority of Moroccans without health insurance.

In 2005, the Moroccan government began attempts to expand health insurance by making coverage mandatory for all public sector and formal private sector employees. These coverage plans were third-party payer systems based through mutual insurance companies, which paid for patients to receive care at either public or private facilities.

The government hoped to increase coverage from 16 percent to 30 percent of the population  with these policies. However, as of 2013,  less that 30 percent of Moroccans were insured.

Draft Law 109-2 marks the latest in the government’s series of efforts to increase this percentage and streamline the national healthcare system.