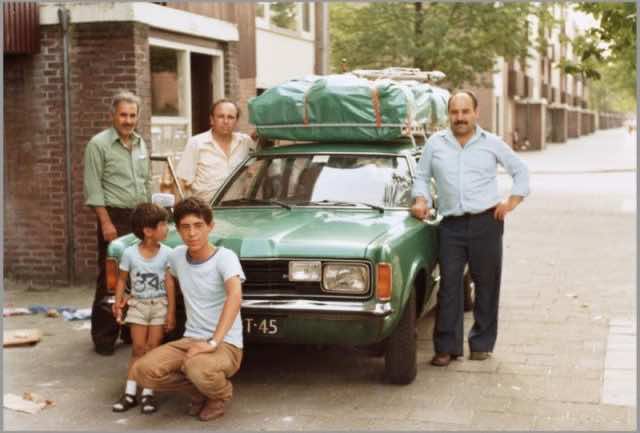 Rotterdam – It is summer, and most people are preparing a trip for several weeks abroad. Most Dutch go to France, Spain, Greece and Turkey. And most Dutch of Moroccan descent leave for Morocco. Most are stressed by the preparations and can’t wait to lay down and sleep or read a book, but before they can do that a long list of things to do need to be ticked off.

I distinctly remember the time when my parents would prepare for holidays in Morocco; the whole house was always filled with a certain sense of excitement for the summer season. Many weeks before we left, my parents would call family members that lived in Casablanca and Ouarzazate, and asked them what they needed, and the long list of items varied from clothes to coffee to a pack of cigarettes or something else. My parents always bought these items, and as you can imagine, the car was always fully packed.

Also, my father collected as much music as he could and taped it on cassettes. He liked almost everything, but he especially favored The Temptations, and every time I hear music from them,  I am reminded of the long journeys in the car to Morocco.

Like most Moroccan families living in Europe, we also traveled by car to Morocco. Back then I remember we had a green Volvo, and to create space for us in the back during the long trip from the Netherlands to Morocco, my father installed a self-made luggage rack on the roof of the car. Nowadays, it is normal to have such a thing on a car, but believe me; then it was odd. My older siblings often got embarrassed by my father’s contraption and often tried to convince him to remove it without any success.

I’ll take you back to 1985; it was the day of our departure to Morocco. As a young child with my twin brother and older sister, who is just two years older, we didn’t have a choice between wanting to join our parents in Morocco or not. We had to. My other older siblings stayed home because most of them were old enough to make decisions for themselves.

As always before we left for Morocco, my parents got up very early around 3 am in the night and made breakfast. My dear mum would wake us up gently and make sure we were clean and dressed, and once we were at the breakfast table, I sat with my older brother and neighbor as they drank coffee. Our neighbour always took care of our house while we were away.

Before we left, my father, older brother and the neighbour would check the car and take care of last-minute tasks. After saying goodbye to my brother and neighbour, we would get in the car and begin the journey.

We lived up north in the Netherlands, so it took us about 3 to 4 hours to arrive in Belgium. In 1985 the highways were not as busy as they are now, and there were fewer cars as well. Once we arrived in Belgium, my father would pull over for a stop to eat and refuel the car. According to my father, the easy part was leaving the Netherlands, and that was over. The long and difficult part of our trip was getting to France and Spain. So as the younger bunch of the family, we made sure we had enough to do in the car. We occupied ourselves with enough comic books, such as Donald Duck, we took papers and pens with us to play games and had piles of snacks to eat during the journey. I remember so well; we always ate till we got sick and my father would always have to stop the car in the middle of nowhere. He was usually very aggravated with us.

As the journey progressed into France and Spain, the car would get so hot that if felt like we were in a real pressure cooker. Back then the cars were not air-conditioned and believe me when I tell you that even if you opened the window for fresh air, the enormous heat in the south of France and Spain felt like a hot hairdryer.

The journey to Morocco always started with lots of fun and excitement, but after a day of driving and entering France and heading to Spain, my twin brother and I became more and more irritated by the heat. To keep cool, my brother would sit on the floor of the car, this way my sister and I had more space in the backseat.  After a while, he would begin to complain about the heat and repeatedly ask why people like Spain so much.

After three long days of driving, we would arrive in Algeciras; we longed for fresh air, and we were always so happy to arrive. We could see Morocco on the other side of the sea, which always made my parents very emotional.

Whenever we arrived in Morocco, Tanger, my parents would get out of the car, touch the ground as a gesture and thank God for a safe trip back home. After that, we would head to Casablanca and the four weeks of holiday would begin. Merhaba.