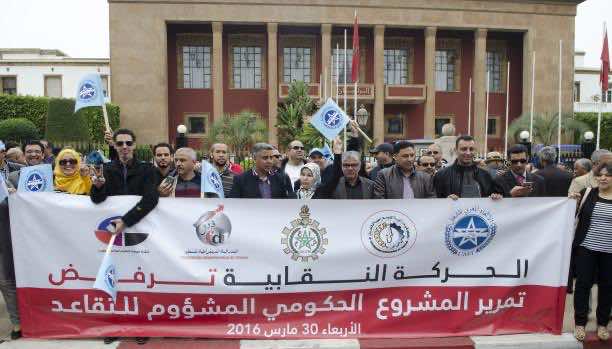 Rabat – Thousands of Moroccans protested in Rabat near the medina yesterday to show frustration toward a new law that will legally move retirement age from 60 to 63.

A majority of Morocco’s Parliament voted in favor of the new law, 70 to 35, on Wednesday, pushing the new legislation into effect starting next year.

Protestors took to the streets after the National Coordination Against Pension Reform announced the Parliamentary vote.  People carried signs with phrases like, “Freedom, dignity, and social justice.”

This isn’t the first time Moroccans have protested about this new law.  In fact, in early January, there were protests and early this month, demonstrators called on Parliament to reject this new bill.

Though it has sparked much unrest, Morocco’s Head of Government, Abdelilah Benkirane has explained the need for this new bill.  “Our pension systems are at stake.  No one wants to reach a situation like in Greece.  Of course we will negotiate with unions, but raising the retirement age is an obligation to avoid collapse,” he said.

According to a recent article written by Morocco World News, The Carnegie Endowment for Peace estimates that there aren’t enough people working in Morocco to sustain the current system.

It says that no more than 45 percent of working-age Moroccans are employed. However, many of those whom are employed work in jobs that don’t contribute to the pension system. To add, a report released by an Oxford Business Group says the pension fund for civil servants will become bankrupt by 2021.

Although many Moroccans have strongly opposed this legislation, calling it a “conspiracy,” and “corrupt,” the Moroccan Parliament urges it will benefit the kingdom.