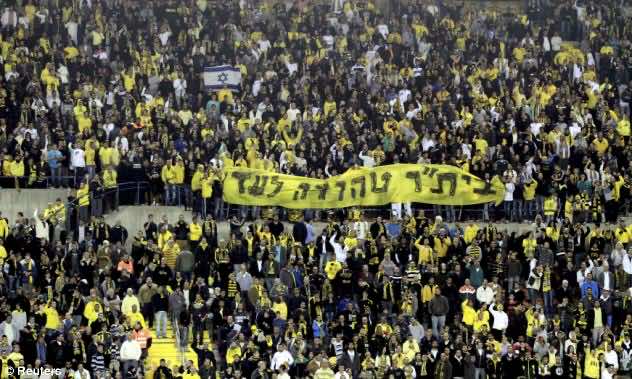 Rabat – 56 people were arrested by police after being associated with vicious La Familia group.

Raids were launched overnight by Israeli police in order to disperse the country’s most renowned group of football tearaways – insiders of the La Familia group who follow Beitar Jerusalem FC.

56 were arrested, nine of which were soldiers and also included minors, after hundreds of officers carried out raids across the country which saw individuals belonging to the group targeted for their notorious acts of violence, criminal connections and racist attacks.

Earlier this month an announcement was made that a new police unit created especially for targeting Israeli sport violence would begin within the following weeks, predominantly directing their focus on violence at football matches.

The police stated that all of the people they had arrested overnight were suspects of belonging to an even more radical La Familia sub-group. These arrests occurred after undercover officers infiltrated La Familia over the space of a month and were led to believe that individuals were selling weapons and violence.

Beitar fans rioted in Belgium last year after having faced a 5-1 defeat in a Europa League match, seeing fans throw flares onto the pitch and the opposing goalkeeper, Nicolas Penneteau, get hit by an object thrown in from the crowd.

Back in 2013, Beitar signed two Muslim players from Chechnya which then led to members of the La Familia group burning down the club’s training ground as they firmly disagree to the signing of Muslim players.

“These people are not fans … they come to shout racist chants. They threaten players and the management” says former player and coach Eli Ohana, “La Familia is holding the club and hundreds of thousands of fans as hostages. They don’t care about anything. They don’t care if the club collapses or is punished.”