New York - The members of the Security Council welcomed the package agreed to by Morocco and the UN Secretariat on MINURSO, as part of its mandate, reaffirmed in its successive resolutions, Morocco's permanent representative to the United Nation, Ambassador Omar Hilale said Tuesday in New York. 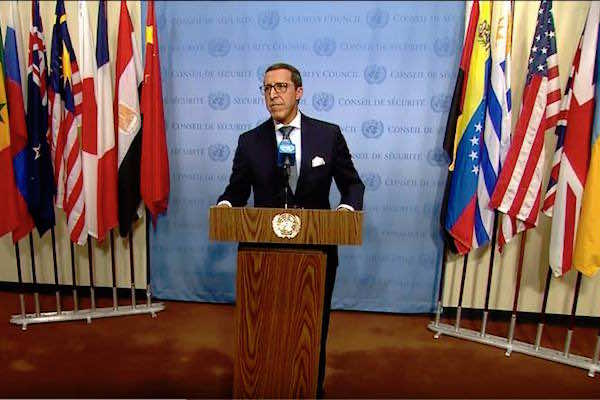 New York – The members of the Security Council welcomed the package agreed to by Morocco and the UN Secretariat on MINURSO, as part of its mandate, reaffirmed in its successive resolutions, Morocco’s permanent representative to the United Nation, Ambassador Omar Hilale said Tuesday in New York.

“The Security Council’s members welcomed the package agreed to by Morocco and the UN Secretariat on MINURSO, as part of its mandate, reaffirmed in its successive resolutions and expressed their full satisfaction with the end of the crisis, dating back to last March,” Hilale told the press following a closed meeting of the Security Council on MINURSO..

At this meeting, UN deputy secretary-general for peacekeeping operations Herve Ladsous and UN secretary-general’s special representative to the Sahara and head of MINURSO, Kim Bolduc, presented a report during a briefing on MINURSO, the Moroccan diplomat pointed The Security Council’s members commended during the meeting Morocco’s efforts to reach this agreement, he added.

“They also welcomed the renewed commitment of Morocco for the implementation of this agreement and thanked the Kingdom for securing the continuity of MINURSO’s operations despite the crisis,” he added.

As many as 28 member countries of the African Union sent a motion to Driss Deby, President of the Republic of Chad and current Chairman of AU, in which they welcomed the decision of the Kingdom of Morocco, “a founding member of the OAU” to rejoin the African Union and called for the immediate suspension of the so-called “Sahrawi Arab Democratic Republic”, the diplomat said.