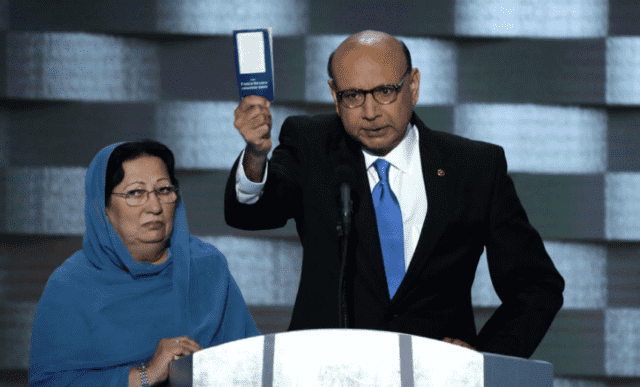 Rabat – The father of a deceased Muslim soldier who supported Hillary Clinton at the Democratic Convention challenged Donald Trump from the podium by asking him, “Let me ask you, have you even read the Constitution?”

Khizr M. Khan, the father of Captain Humayun S.M. Khan, stood on stage at the DNC, and continued to challenge Trump, “I will gladly lend you my copy.  In this document, look for the words liberty and equal protection of law.  You have sacrificed nothing and no one,” he said, according toTime.com.

Khan’s son was an Army Captain who was killed in Iraq while fighting.  The Muslim-American’s father had spoken on behalf of his deceased son, insisting that if Donald Trump had been President while his son was alive, he would have never had the opportunity to defend America.

“Like many immigrants, we came to this country empty-handed.  We believed in American democracy, that with hard work and the goodness of this country, we could share in and contribute to its blessings.  Our son, Humayun, had dreams of being a military lawyer but he put those dreams aside the day he sacrificed his life to save his fellow soldiers.  If it was up to Donald Trump, he never would have been in America,” he said of his son.

Khan continued by pointing out that Trump has offended and continuously targeted women, Muslims, and Mexicans.  A ban on Muslims and building a wall around Mexico, which Trump has even started a petition to raise funds for, are at the center of his list of goals should he indeed be elected as President.

The full video can be found here.