Tetouan - King Mohammed VI handed here on Saturday distinctions to a group of Moroccan and foreign outstanding figures, on the occasion of the 17th anniversary of the sovereign's accession to the Throne of his Glorious Ancestors. 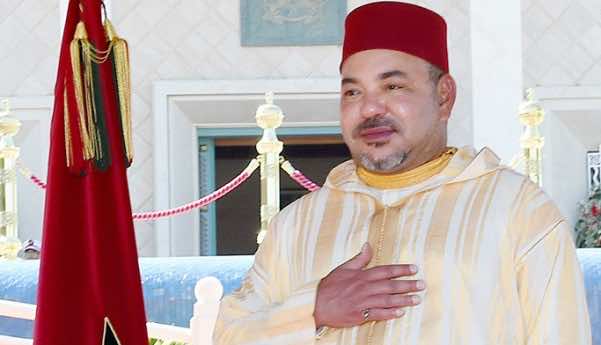 Tetouan – King Mohammed VI handed here on Saturday distinctions to a group of Moroccan and foreign outstanding figures, on the occasion of the 17th anniversary of the sovereign’s accession to the Throne of his Glorious Ancestors.

– Abbas El Jirari, former Adviser of HM the King and former teacher at the Royal School.

– Amina Benkhadra, director of the national office of hydrocarbons and mining.

– Leila Ameziane Ammor, President of BMCE Foundation of Education and Training and who seeks through the Medersa.com initiative to facilitate access of poor children to education and training.

– Late Mohamed Bahi, journalist and thinker of Mauritanian origin (the Wissam was handed to his widow Fatima Arssime).

– Saida Al Amrani Karim, Deputy Vice President of Safari Sofipar-Cofimar Holding, member of the Board of the Mohammed V Foundation for Solidarity, and an active woman in the social field.

– Michel Mathieu, known under the name of Charles Saint-Prot, researcher and expert of the Arab and Islamic world.

– Khalid Jalid Sahouli, specialist in gynecology in Germany, director of gynecology service at Chariti Hospital in Berlin, one of the leading experts in the world in women’s cancer.

– Mohamed Bihi Aziz, Moroccan doctor at the Royal Hospital in Liverpool who has discovered a promising treatment against prostate cancer.

– Othman Laraki, Former Vice President of Twitter who participated in the founding of several technology companies in the US, and currently president of Color Genomics which specializes in early diagnosis of cancer. Wissam Al Mukafaa Al Watania of 3rd rank (officer):

– Latifa Jbabedi, Researcher at the Institute of Studies and Research for Arabization in Rabat, former member of the Equity and Reconciliation Commission.

– Youssef Skali Hosni, general manager of Cantor Fitzgerald, a pioneer group in the area of financial services in New York, and one of the best digital analysts.

– Aicha Hejjami, former Professor of Public Law at the Faculty of Marrakech, currently a researcher in issues related to women and to the Islamic Sharia.

– Fatima Baraka, a Moroccan living in Australia who helped a Moroccan child, born with face deformities, undergo a surgery in Melbourne.

– Rachid Amrrous, an engineer at the Japanese space agency JAKSA. –

– Naoual Soufi, an active Moroccan woman in the humanitarian field in Italy.

– Bouziane Outiti, energy expert, winner of the “Energy Globe Award” for his liquid sanitation project in the province of El Haouz.

– Nihal Chahbar, student who got the best mark in the 2016 baccalaureate in private high schools (19.32).

– Oumaima Qassab, student who got the best mark in the 2016 baccalaureate in public high schools (19.21).

The King also awarded Czech Republic’s ambassador Michaela Fronkova with the Alawite Wissam (exceptional class) and Netherlands’ ambassador Ronald Strikker Gerard with the Alawite wissam of first class (Great officer) on the occasion of the end of their missions in Morocco.