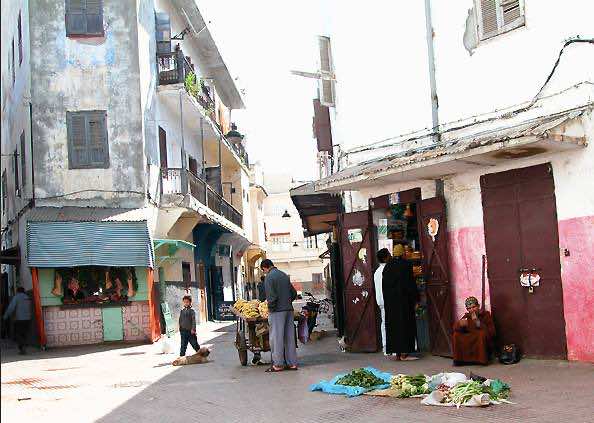 Rabat – Moroccan street vendors have embedded themselves as an integral component of the Moroccan landscape.

One can hardly imagine a nightly walk through the medina without weaving through the smoke of grilled kefta or seeing the last rays of sunlight while hearing rekha w rebakha (cheap), zido mab9ach (come here, it’s the last call), or mol lamli7 ba3 w ra7 (quality is here and we are about to leave). Over the years these sights have increased while simultaneously receiving resistance from the state.

Few studies have granted insights to the characteristics or motives of illegal street vendors, farasha. Despite common opinions of farashat as creating unfair competition for formal businesses, crowding public areas, and are motivated by opportunistic agendas, the majority of street vendors are instead the victims of an unresponsive regime to the plight of the poor. The Moroccan informal economy is a source of livelihood opportunities and an economic safe haven for many in a climate where the formal sector has failed to produce a sufficient amount of jobs for the increasing working age population.

Governments have a social contract between their citizens. This contract outlines their mutual responsibilities and rights. In many cases, the Moroccan government has failed to provide safe livelihood opportunities for many of its citizens. Consequently, many take to the street as their last resort to make a living. Many regular street vendors in Rabat voiced their attempts to work with the government in multiple capacities, such as: forming formal associations, working for a set time frame, or moving to government constructed shopping plazas and paying rent.

Three vendors voiced their frustration as they spoke about their attempts to create a formal association to negotiate with the government a mutually beneficial arrangement. One 65 year- old vendor of mirrors stated, “we went through all of the procedures to get an association approved. The officer did not accept it because if we came together we would be stronger and the officers do not want that”.

According to the government’s latest report on informal activity, the number of those employed in the informal sector grew from 1,902 million in 1999 to 2,216 million in 2007[i]. As of 2012, informal employment particularly affects the youth as more than 80 percent work in the informal economy. In addition, micro and small enterprises with less than 9 people represent approximately 97 percent of businesses in Morocco, in which 60 percent are informal[ii] (World Bank, 2013).

Based upon my research of Rabat illegal street vendors, the majority want to find a place in the modern capital economy yet are unable to do so due to the lack of political will to implement sustainable national policies. Instead, the Moroccan government grants discretion to local police chiefs and other officials. Policies pertaining to urban informal economic activities are contradictory as they vary between locations, ranging from tolerance to eviction and massive street clearances.

The most popular pilot programs establish dedicated commercial centers in which informal actors could rent stalls or locations. These programs have been initiated in urban areas such as Kenitra, Rabat, and Casablanca. However, the majority of these polices have failed due to corruption, limited political will, and high overhead costs.

Most recently in March 2015, the government sponsored a program to construct commercial spaces for informal vendors in Yousouffia, Rabat only to declare that the funds were suddenly “lost”. Many cited corruption as the cause. Another initiative entitled Souk Hamis was designed to allow traders to work in a designated area within the city for a fee. As a vendor recalled, this program granted high discretion to officials. Officials would abuse their power and demand bribes for the right to sell in specific locations. In these cases, despite the proclamation of the mutual benefits of such programs, when implemented they only benefit officials.

Despite the failure of these programs, vendors continue to wish to become legal businesses. In the section of the studied informal market, the majority of regular street vendors wanted authorization and believed that authorization would mitigate their primary growth constraints of police confiscation. As one vender of used clothes stated, “as long as I can drink my tea and sell my goods without being bothered I will be fine”. Another vendor of men’s accessories stated, “we will have more dignity if we have authorization so we can sell stuff without being worried”.

The collapse of state and municipal policies to aid street vendors in creating legal businesses, have caused police to create their own method of regulating informal markets. Half of the regular street vendors in the studied area were asked to pay bribes. Bribes to police are an informal method to continue selling despite the illegally of their activity. Vendors described regular bribe collections in the market in the form of a daily payment of 5 dirhams and a weekly payment of 50 dirhams. One vendor of children clothes noted, “when you pick up your stuff at the police department you go alone and pay the bribe to get it back”.

One informant, a formal store employee of compact discs, discussed how sometimes police worked with formal business owners. He explained how the public space that is cleared from informal vendors is given illegally to formal businesses. In exchange, the store gives payments to the local police chief. Despite the illegality of these methods, these activities are the only consistent policies that are helping street vendors to survive.

In order to make sustainable policies beneficial for both the state and citizens, the Moroccan government needs to include vendors in developing national policies aimed at curbing informal activity. It is through this arrangement in which the poor can support themselves with honorable work as opposed to being further pushed in illegal activity that harm the state.

The article is based on the writer’s field research conducted in Rabat which studied how the state and informal street vendors can form mutually beneficial relationships to support livelihood.