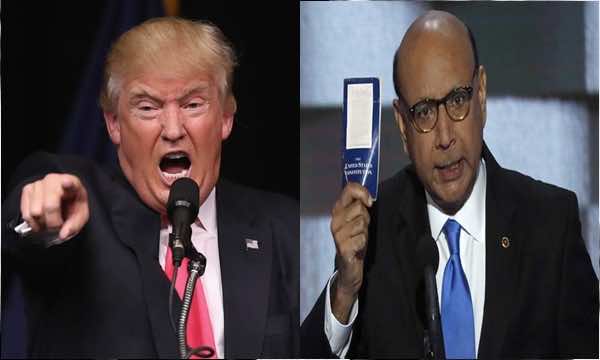 Rabat – Donald Trump has responded to Khizr Khan, the father of a deceased Muslim Army captain, who challenged him at the Democratic National Convention last week.  It was a response that generated scores of angry comments on his social media page, that sparked critical media interviews between him and journalists, and even provoked a satirical hashtag on Twitter called #trumpsacrifices.

Khizr Khan challenged Donald Trump last week at the DNC asking, “Have you ever even read the Constitution?” His comments came amid a time in Donald Trump’s campaign where he adamantly pushes for a ban on all Muslims and a wall separating Mexico from the United States, a proposal that has sparked much criticism among democrats, but has also attracted many republicans.

Mr. Khan’s son died fighting for America in the Iraq War, 12 years ago, an act Hillary Clinton has called courageous and “the best of America.” At the convention, Mr. Khan said his son would have never had the opportunity to come to the United States, had Donald Trump been president at the time.

He continued challenging Trump’s knowledge of the Constitution, holding up a paper pamphlet of the document, adding, “I will gladly lend you my copy.  In this document, look for the words liberty and equal protection of law.  You have sacrificed nothing and no one.”

Trump appears to be caught in one of the most viscous crises during his campaign, angering those who have heard his response tothe Khan’s.  In an interview yesterday, Trump asked why Mr. Khan’s wife had “nothing to say” at the DNC.

“His wife, if you look at his wife, she was standing there, she had nothing to say,” Trump said during the interview with MSNBC. “Maybe she wasn’t allowed to have anything to say, you tell me, but plenty of people have have written that,” he said in an interview with George Stephanopolous of MSNBC.

When Stephanopolous questioned Trump about the sacrifices he has made in his life, he answered, “I think I’ve made a lot of sacrifices. I work very,very hard.  I’ve created thousands and thousands of jobs.”

Trump added on Twitter, “I was viciously attacked by Mr. Khan at the Democratic National Convention.  Am I not allowed to respond?  Hillary voted for the Iraq war, not me!”  Another tweet followed, “This story is not about Mr. Khan, who is all over the place doing interviews, but rather RADICAL ISLAMIC TERRORISM and the U.S.  Get smart!”

Though thousands “liked” and retweeted his comments on social media, hundreds of others commented in disgust, some reprimanding him, some mocking him.

Mr. Khan’s wife has since responded to Trump who questioned why she didn’t speak about her son at the DNC, saying she simply couldn’t because she was too sad.

“Donald Trump said I had nothing to say. I do.  Donald Trump has asked why I did not speak at the Democratic convention.  He said he would like to hear from me.  Here is my answer to Donald Trump:  Because without saying a thing, all the world, all America, felt my pain,” she wrote in the Washington Post.

“Every day I feel the pain of his loss. It has been 12 years, but you know hearts of pain can never heal as long as we live. Just talking about it is hard for me all the time. Every day, whenever I pray, I have to pray for him, and I cry. The place that emptied will always be empty,” she wrote.