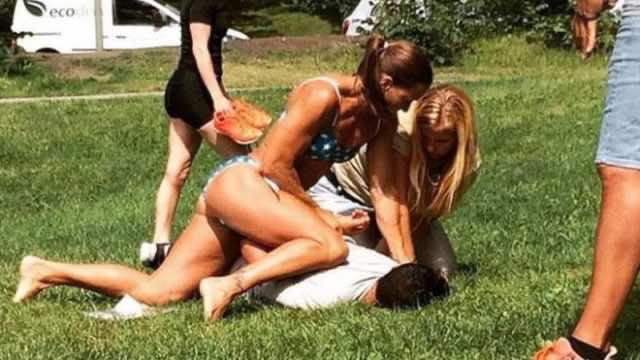 Rabat – A suspected thief was successfully tackled by a Swedish bikini-clad police officer who was off-duty in Stockholm.

Mikaela Kellner claimed that after having noticed that the thief had taken one of their mobile phones, she and fellow officer took on the man, stating that she would have pursued him “even if she were naked”.

The escapade took place in Stockholm’s Ralambshov Park on Wednesday where Kellner was sunbathing with her friends. The group were approached by the man claiming to be selling publications in favour for the homeless, leaving Kellner suspicious when the man lingered around and placed some of the papers over their blanket. One of her friends noticed that her phone was missing shortly after the man had picked up his papers and left.

Mikaela Kellner told Swedish news site The Local “there was no time, so I ran after him, maybe 15 metres or so.”

“One of my friends is also a police officer, so we got hold of him. He tried to get away so we held onto him harder.”

The thief was arrested by police patrol and the phone was rapidly retrieved.

“I’ve had a lot of positive comments both from friends and colleagues,” she told The Local.

“It happens all the time that valuables are taken like this… I mainly just wanted to raise awareness of how cunning these people are, almost like magicians.”