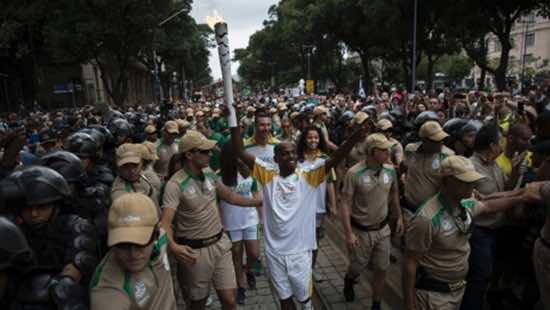 Police used tear gas and stun grenades in a poor suburb of Rio de Janeiro on Wednesday in order to divert protesters and clear the path for the Olympic torch, just two days prior to the start of the Olympic Games.

The torch was delivered to Rio’s mayor earlier that day, 9.15am local time, by Olympic Brazilian sailors who had travelled a near round 20,000km journey through one of the world’s largest countries.

However just a few kilometres away from the arrival of the torch, 450 heavily armed policemen were carrying out dozens of arrests against drug traffickers within the Alemao slum, a region close to the main Olympics venues.

Three people were reported to have been injured by rubber bullets fired by the police, including a 10-year-old girl, local media stated, in an attempt to clear the path for the torch due to anti-government protesters throwing rocks and attempting to block it.

The world’s largest sporting event arrives in Brazil during the country’s worst recession, leaving many residents questioning the capability and wisdom of actually hosting the Olympics – a bid in which Brazil won back in 2009 whilst their economy was at an all time high.

85,000 police, soldiers and security are being situated within Rio during the course of the Games in order to prevent extremist attacks and street violence, more than double what London had back in 2012 when they hosted.