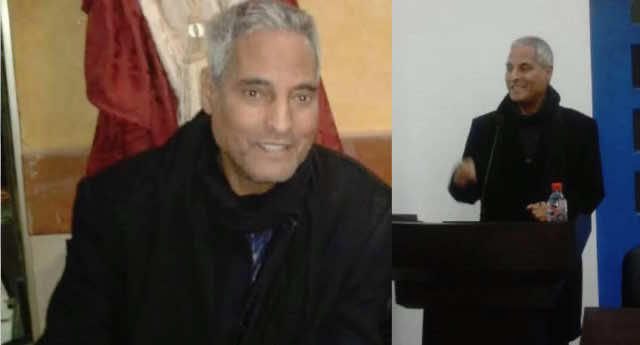 Kenitra – This author’s prison literature fascinates the Moroccan readers of today, thirsty to know of their past.

Driss Tayyib Chberreq is an author who survived the darkness of Tazmamart prison, aboard a mad train to an unknown destiny.  He wrote two books about his time in jail “Le train fou” (The Mad Train) published in 2013 and “Le Suicide de Mimoun” (The Suicide of Mimoun) published in 2015.

Chberreq was born in 1948 in Dwagher, a small town located in the Kenitra region. He was an officer at the Royal Military Academy of Meknès in the 1970s during the Lead Years; a period between 1960 and 1980 marked by state violence against political opponents. Fifty-eight officers, non-commissioned officers, infantries and aviators were imprisoned because they were involved in the two coup attempts – one in 1971 in Skhirat and the other in the 1972 attack against the late King’s airplane.

Chberreq, who was in Cell Number 11, survived after 18 years and a few months of detention in Tazmamart; a prison in the South East of Morocco in the Atlas Mountains. There were twenty-eight inmates in total.

Once free, Chberreq was interested in prison literature. He studied French literature at the Faculty of Letters in Kenitra, and then started to pile up his poems, which were memoirs of his time in Tazmamart. He wrote his first book Le train fou (The Mad Train) in 1996.

After many years, Le train fou was eventually published in 2013.

Chberreq chose the allegorical title because the train is a convoy of military vehicles, which has a starting point. For him, the starting point was the school of Ahermoumou of non-commissioned officers’ training. That train took a different direction, following the orders of the chief and it derailed.

Le train fou is a testimony of many events that began at the military school of non-commissioned officers and ended in Tazmamart jail.

In March 2015, Driss Tayyib Chberreq published his second book Le Suicide de Mimoun (The suicide of Mimoun). Mimoun was an aviator who was imprisoned after the putsch of 1972 and committed suicide in Tazmamart. Six months later, all the prisoners were released.

According to the author, Tazmamart jail shouldn’t have existed. But for him and for all Tazmamart prisoners, Morocco was a pride, a homeland that they are so attached to even when they were in darkness. They kept their patriotism alive even through the worst moments of their lives.

Chberreq said, “my friends and I, we love our country, we love our motto: ‘God, the Homeland, and the King. ’Unfortunately, many of our fellow Moroccans behave hypocritically and refuse to hear us.”

Driss Bouloufa, 56, a high school physics teacher said, “Driss Chberreq was my cousin, and my dad helped him to enrol in school. He was such a good student, but he spent a large part of his life in jail. Before he was detained, he got engaged to a girl he was going to marry in the summer of 1971, the summer of the putsch. But his life totally changed and he told her in the tribunal, “My fate is unknown now; you have to live your life and don’t wait for me.”

“During his time in Tazmamart, he learnt the Holy Quran by heart. His mom was so disappointed, and she died before he was released. Once free, he found a job in “Domaine chaude soleil” an industrial wine factory in Sidi Slimane, he couldn’t stay there, and he wanted to go to college. He chose French because he loved this language a lot and he used to speak it fluently. Then he started his writing career. He got married, had a child named Abderrahim. He was his dad, his brother, and his friend at the same time. I learned from him how to love people and how to be such a sociable person.” continued Bouloufa.

Abdelatif Fawzi, 61, who is an author and a French poet is also interested in prison literature, he wrote the preface of Le suicide de Mimoun. He was a close friend of Driss Chberreq. “He was one of the closest people to me.” Fawzi said of Chberreq.

“We are from the same region, his time in the University of Kenitra after the jail period was not in vain. He first wanted to study philosophy because he liked Jean Paul Sartre and Albert Camus, but he chose French literature and then he wrote two wonderful books. His relation with students and professors was amazing; he was a respectable person. Rest in Peace, Driss.”

Jillali Belhajali, 56, a French teacher said, “Driss Chberreq was a friend, a cousin and he was my neighbour. Driss was a sociable person; he kept in touch with all his family members after surviving Tazmamart. On May, 6th, 2001 he autographed the book Tazmamart Cellule 10 (Tazmamart Cell10) published by his friend Ahmed Marzouki and he wrote a quote for me that I will never forget.”

“Martyred as much as the author of this book, being his immediate neighbour at Cell 11, I first confirm his story and I dedicate this book to all those who directly or indirectly helped us to regain our eyesight and life in order to see that our country is one among the greatest.”

On November 21st 2015, the one whom people called “The green-eyed officer” passed away 3 days after Independence Day.  Morocco lost one of its Tazmamart survivals:  Driss Chberreq passed away at the age of 67.