Rabat – Italian Interior Minister Angelino Alfano announced on Sunday, August 7 that a new security unit will be formed to monitor the flow of funds from Islamic countries to the mosques and chapels in Italy.

The national Italian television channel reported that Alfano said, “The financial guards created a unit that specializes in monitoring the financial transactions coming from Islamic countries. This decision was made in parallel with the orders that I gave to monitor jihadist activities in Italy, according to the recommendations made by the committee of strategic analysis for the fight against terrorism,” which is affiliated with the Ministry of Interior.

He explained, “Through this unit, the flow of funds from Islamic countries to Islamic institutions and mosques, chapels and control will be tracked.”

The “Financial Guard ” is considered a weapon affiliated with the Italian Army, whose mission is to combat financial crimes, such as crimes related to the Mafia and drugs.

Alfano pointed out that his country “is involved with many countries, including the United States and the European Union, to control the financial flows targeted to fund terrorism. The funds rate has risen after the 9/11 in the United States.”

As for the security status in Italy, he said, “The security alertness is at the level that precedes a terrorist attack,” emphasizing the need for “community members to work in collaboration with the security forces in order to detect terrorists.”

According to official data, the number of Muslims in Italy reached 1.613 million, 150,000  of which hold Italian citizenship, while the rest have legal residency. There are an estimated 1000 imams across the country. 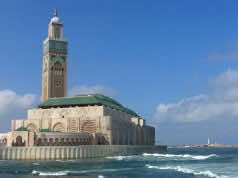