Olympian Moroccan boxer Hassan Saada’s future wife defended her fiancé via social media on Sunday after sexual assault claims surfaced just a day before he was due to play in his first match, Moroccan news site Le360 reported.

22-year-old Saada was accused of attempting to rape two Brazilian waitresses on Wednesday at the Barra da Tijuca Olympic village, however the Moroccan still protests his innocence.

One of the women stated that the boxer pushed her against a wall and tried to kiss her after having made sexually-graphic gestures towards her, whilst also having reportedly felt the breasts of the other woman and offering her money to perform sexual acts upon him, the BBC claim.

Saada was due to compete against Turkish boxer Mehmet Nadir Unal in the preliminary rounds of the Olympics however is now being held in a police station near the Maracana Stadium where he will be retained for 15 days whilst the case continues to be investigated.

Moroccan Boxer Saada to Appear in Court on December 15 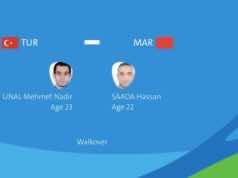