New York - In an undated poem titled In The Midst of My Pain, Christian author, poet, song writer and playwright, Margaret C. Mullings, calls for God’s Love and Presence in the midst of adversities. 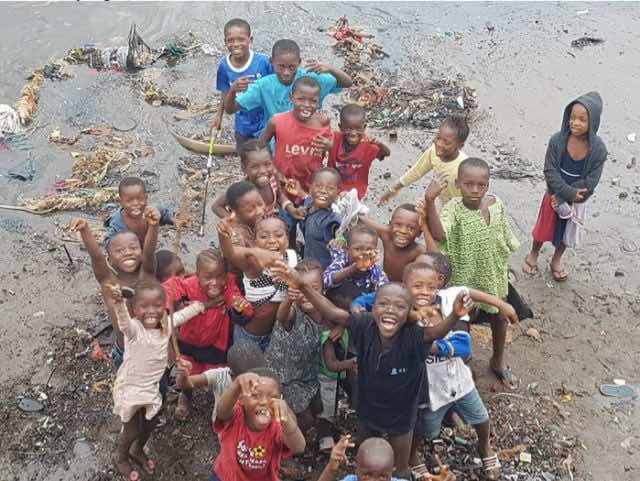 New York – In an undated poem titled In The Midst of My Pain, Christian author, poet, song writer and playwright, Margaret C. Mullings, calls for God’s Love and Presence in the midst of adversities.

In the midst of my pain
Do not allow my living be in vain.
For I must not kick and shove
I must be harmless as a dove.
Yet I need Your wisdom from above
For the storms are raging and the waters
Threaten to over take me…the dark
Clouds are gathering…but in the midst
Of it all I see a glimmer of light..yes!
In the midst of the angry billows, the light
Is getting even brighter.

The photo above by one of Africa’s leading journalists was taken on Wednesday, August 10, 2016 at Moa Wharf, a shantytown in a seaside area around Freetown, capital city of Sierra Leone.

Margaret Mullings did not have the children in this picture at heart when she beseeched God’s Love and Presence around herself. Nor, also, was the author of this beautiful and telling picture contemplating Mullings’. What, however, is manifesting, is that Mullings’ prayers speak so well and deep into the heart of this photo.

In the midst of their pain, the brightness that defines the photo of these children overshadows the bleakness of society. As such society must not allow their living to be in vain.

It is telling that they yearn for comfort and not to be kicked around and harmed, but must be nurtured to be as peaceful and loving as doves. With stretched out arms, they call to be rescued from the storm that threatens to overtake them, a storm of an unassured future, a raging storm that not long ago came and deposited the rubbish around them.

According to the author of the photo, Sierra Leonean Umaru Fofana, the rubbish appears like a map of the world behind and around them. Of course these children and the millions of their kind are the world.

The eyes of responsible journalism easily capture news-worthy development at every blink and turn. It is therefore not surprising that the veteran journalist, human rights activist and author, Umaru Fofana captured this heart-thumbing but striking picture that speaks so well into Mullings’ at first sight.

In a Facebook posting of it Fofana expresses both joy and frustration “I love the beauty and resilience of these wonderful young compatriots of mine. Look how cheerful they look despite the unacceptably appalling conditions they live in… What appear like a map of the world behind and around them is in fact tonnes of garbage. That’s their playground and their toilet. There is only one proper toilet for a community of 6,300 people…. I spent a good amount of time with them this week. Two of the kids told me that all they wanted was a good education, toilets and proper sanitation.”

As the dark clouds of failure gather and the storm threatens, the brightness that comes of the joyful and happy faces of each one of these little girls and boys overshadows signs of failure as seen at the background. Yet all, particularly government must act now to guarantee a brighter life for all children.

This photo is beautiful. It is deserving of an international photography award.