Rabat - Minister Delegate to the Head of Government for the Administration of National Defense, Abdeltif Loudyi, met Saturday in Rabat with a delegation of Senators and Representatives of the US Congress. 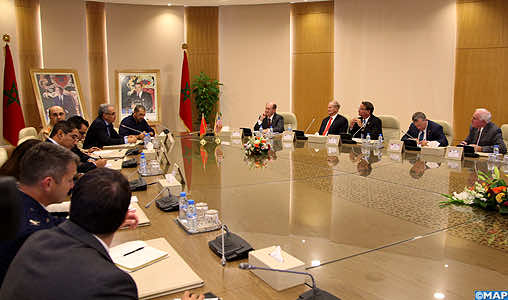 Rabat – Minister Delegate to the Head of Government for the Administration of National Defense, Abdeltif Loudyi, met Saturday in Rabat with a delegation of Senators and Representatives of the US Congress.

The delegation is composed of Christopher Coons (Senator of Delaware), Gary Peters (Senator of Michigan), Bill Nelson (Senator of Florida) and Charlie Dent and Pat Meehan, Representatives of Pennsylvania.

During this meeting, both parties expressed their satisfaction with the excellent age-old relations of friendship and multifaceted cooperation between Morocco and the United States, said a statement by the Administration of National Defense, adding that the US delegation welcomed Morocco’s efforts to strengthen military cooperation, which propel the Kingdom to the rank of Washington’s major allies outside NATO.

Members of the US delegation expressed on this occasion, their admiration for the significant progress in the democratic transition and the impressive level of development achieved by Morocco in various fields under the leadership of HM the King, the same source added.

They also highlighted the political and economic stability of the kingdom in an area exposed to multiple security challenges, and its important role in regional stability and security.

The US delegation hailed the clear commitment of Morocco on several fronts to combat terrorism and violent extremism, and its fight for the promotion of the values of solidarity, freedom and peace in the world.