Fez - According to French Officials, David Lisnard, Mayor of Cannes, France, banned the Burquni, a Muslim religious swimsuit that covers the entire body. 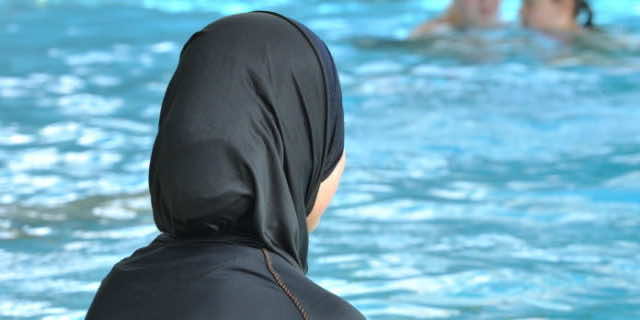 Fez – According to French Officials, David Lisnard, Mayor of Cannes, France, banned the Burquni, a Muslim religious swimsuit that covers the entire body.

The measure applies to the town of  Riviera, a tourist resort known for its annual film festival that attracts the world’s best actors. The initiative aims at avoiding ostentatious symbols  from promoting violence or disorder.

The ban notification states, “Access to beaches and for swimming is banned to anyone who does not have bathing items, which respects good customs and secularism.”

“Beachwear, which ostentatiously displays religious affiliation, when France and places of worship are currently the target of terrorist attacks, is liable to create risks of disrupting public order, which it is necessary to prevent,” it added.

Thierry Migoule, head of municipal services for the town, explained that the ruling is not “against a religion per se.” Rather, it is against clothes that symbolizes allegiance to a terrorist group France is at war with.

France, which has witnessed diverse terrorist attacks in recent months, bans wearing conspicuous religious symbols at schools in accordance with the country’s secular tradition , which  separates state from religious institutions.

Since the banning of the Burqini on July 24,  no cases violating the ruling have been registered. A private event hosting Muslim women wearing Burqinis in a water park near Marseille this week was cancelled since it had stirred controversy in the region.